Trending
You are at:Home»Aviation»Happy end to the tail as airport pup finds new home 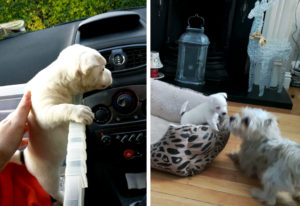 The six-week-old puppy who was found at Dublin Airport last week has headed out of the departures door to a new home.

The pup, who was named Sneachta by airport staff, has found a loving home – and a new four-legged friend there – with a member of the airport’s security team who’s a dog owner.

The local vet who treated Sneachta after he was found in a plastic container behind the Terminal 1 multi-story car park advised that given his young age, the puppy should be rehomed with another dog.

The airport worker has now adopted Sneachta and she has renamed him Milo, Dublin Airport reported on its twitter feed here.

“We were overwhelmed with offers on social media from many members of the public offering to take Sneachta,” said DAA spokeswoman Siobhan O’Donnell.

“We also received a number of blankets and toys for him, and these have gone with Milo to his new home. We would like to thank everyone for their concern in relation to Sneachta/Milo and also for their generosity in offering to rehome him.”

The DAA said anyone interested in adopting an unwanted dog should contact the Irish Society for the Prevention of Cruelty to Animals (ISPCA) on 043 3325035 or via email info@ispca.ie.