The Wild Atlantic Way has beaten off competition from some of the world’s top scenic motoring areas to be named ‘Best International Self-Drive Route’, at an awards ceremony in China. The awards, held in Shanghai, were organised by HuiZuChe, a car rental portal and one of the top travel companies in China offering self-drive holidays. 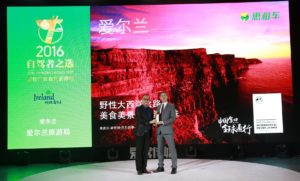 The Irish coastal route was one of the destinations listed in the ‘Best International Self-Drive Route’ category – beating driving routes in Sweden, Malaysia, Tasmania, California and Florida, to take the number one spot.

The 2,500km route, which stretches from Malin Head in Co Donegal to the Old Head of Kinsale in Co Cork was officially launched in 2014, as part of a bid to revitalise tourism on the west coast.

Major tourist routes such as the Great Ocean Road in Australia, the Garden Route in South Africa and Highway 101 and the Pacific Coast Highway in the United States had been examined for insights into what was needed to attract visitors to Ireland.