Trending
You are at:Home»Afloat»Eagle lands in Dublin, US Coast Guard tall ship open for visits 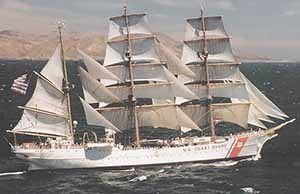 The Coast Guard Cutter Eagle, America’s Tall Ship came to Dublin on Thursday, May 26th at 1:30 p.m. Eagle will moor up at Sir Rogerson’s Quay Wall and will remain open for free public tours through Monday, May 30th.

Barque Eagle will be open for free public tours on the following dates and times:

At 90 meters (295ft) in length, Eagle is the largest tall ship flying the stars and stripes and the only active square-rigger in United States government service.

Constructed in 1936 by the Blohm and Voss Shipyard in Hamburg, Germany, and originally commissioned as Horst Wessell by the German Navy, Eagle was a war reparation for the United States following World War II. Eagle is a three-masted barque with more than 6797 square meters (22,300 sqFt) of sail and 9.7 kilometers (6-mi) of rigging. Eagle has served as a classroom at sea to future Coast Guard officers since 1946, offering an at-sea leadership and professional development experience as part of the Coast Guard Academy curriculum.

During this sail, Eagle also hosts cadets from the Royal Malaysian, and Honduran Navies who, after they graduate with a 4-year degree from the U.S. Coast Guard Academy, will return to their respective countries to share the lessons learned with their services.

The last time Barque Eagle visited Dublin, Ireland was 1996. After 20 years, Eagle is crossing the North Atlantic to visit this historical city again. After departing Dublin, Eagle will set her course for London, England.