Trending
You are at:Home»Aviation»Aer Lingus markets an Old Orchard in New England: Dublin-Hartford advert features a pier in Maine 200 MILES away 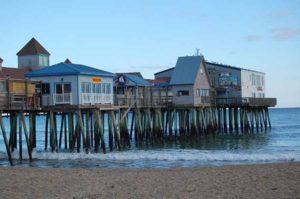 The Hartford Courier has pointed out that the Aer Lingus ads in Dublin airport marketing their Hartford route due to commence September 28 feature a photograph of a scene that is not in Connecticut, but rather the famous pier at Old Orchard Beach in Maine.

Aer Lingus say they are selling the new route as an entry to all of New England, Bradley’s first nonstop route over the Atlantic since the ill-fated Northwest Airlines foray to Amsterdam in 2008.

Connecticut is paying much of the marketing cost €3.7m/$4m million, over three years as part of the deal that brought the Aer Lingus commitment last fall.

Connecticut lost the Northwest flight to Amsterdam in late 2008, about a year after it launched. Bradley passengers have climbed back to about 6m in 2015 short of the peak of 7.2m  in 2006.

Aer Lingus promises to maintain “common-fare” pricing with Bradley and the routes from Boston’s Logan Airport.

Connecticut has agreed to compensate Aer Lingus by as much as $9m over three years to make up for revenue shortfalls. Kevin Dillon, executive director of the Connecticut Airport Authority, said. “We’ve become very competitive as we continue to bring additional activity into the airport, We know the travel is there, it’s a matter of getting the folks to utilize Bradley instead of traveling down to New York or traveling to Boston.”

Keith Butler of Aer Lingus said “today’s sales position is more or less what we expected it to be at this time. We’re now entering into the next phase. From about September is when we will see corporate bookings start to come in. We are trying to establish Connecticut as a destination in its own right,. We are positioning in the Irish market Hartford, Connecticut, as a gateway to New England to get it front and center as to what Connecticut can be.”

Dan Haar writes: That should be fine with us. Besides, Aer Lingus assured me Friday that most of the images in its Ireland ads will be, in fact, of Connecticut. Sure, we’d rather the folks on the Emerald Isle see images of the Thimble Islands or the Old State House. When it comes to this once-a-day round trip, Connecticut needs one thing, at a time when more than our share of companies, billionaires and other humans are leaving, as the state takes a national beating for its less-than-sound fiscal situation: Just sell those seats, baby.

Hear pointed out that a previous governor marketed the state of Connecticut to General Electric with a picture of a Pratt engine.