The new landmarks in the first-half marketing drive include:

The new sites will join the London Eye, Nelson’s Column and Selfridges department store in London, the Colosseum in Rome, the Leaning Tower of Pisa, Burj al Arab in Dubai, the Roue de Paris, the ‘Welcome’ sign in Las Vegas, Niagara Falls, the Empire State Building, the Sky Tower in New Zealand and the Great Wall of China.

In Chicago, Navy Pier, the John Hancock Center, the Wrigley Building, the Civic Opera House, One Prudential Plaza and Chicago Gaelic Park will be greening up. Tourism Ireland’s global campaign – now in its eighth year – kicks off the organisation’s first half promotional drive to grow overseas tourism in 2017.

Minister for Transport, Tourism and Sport Shane Ross said: “From modest beginnings in 2010, the Global Greening initiative has grown to become a significant worldwide reminder of both St Patrick’s Day itself and also of Ireland and its appeal as a visitor destination. From a tourism perspective, the true value of the Global Greening initiative is in the huge level of public interest and consequently media coverage that is generated about St Patrick’s Day and Ireland. The Global Greening is a prime example of the strong return on public investment that is provided by Tourism Ireland’s overseas marketing activity, which is reflected in Ireland’s exceptional tourism performance. From the perspective of our Irish Diaspora, it is gratifying that their contribution to the fortunes of other nations is recognised so visually around the globe.” 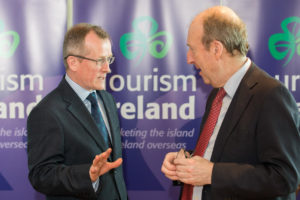 Minister of State for the Diaspora and International Development Joe McHugh said: “The willingness and desire of so many to be involved in celebrating our national day is symbolic of the great friendship and respect that exists between Ireland and so many countries around the world and demonstrates the uniqueness of the St Patrick’s Day celebrations. The celebrations allow us to deepen existing friendships, to strengthen awareness of Ireland and our rich heritage and to forge new ties.

“Tourism Ireland’s Global Greening initiative creates a visual calling card, a reminder of home to our diaspora spread across the globe and sparks the interest of those as of yet unfamiliar with the great heritage that our national day celebrates.”

Niall Gibbons, CEO of Tourism Ireland, said: “The eagerness of cities and countries everywhere to take part underlines the strength of the deep connection that people all over the world feel to Ireland. More than 70m people around the world claim links to the island of Ireland and St Patrick’s Day is a truly unique opportunity to reconnect them with their heritage.

“Our St Patrick’s programme this year will span Great Britain, Mainland Europe, North America, Australia, as well as emerging tourism markets such as China and India. There will be saturation coverage of the island of Ireland across the airwaves, in newspapers and digital media – and that’s an invaluable boost at this time of year for our overall tourism marketing drive for 2017.”