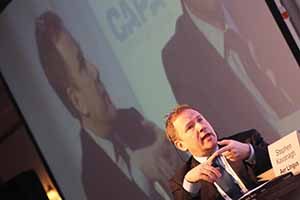 Aer Lingus long anticipated service between Dublin and Miami will commence in September 2017 and long haul capacity will be boosted by 22pc to 2.5m seats next year. Dublin-Los Angeles will also go to a daily service for the summer.

Aer Lingus will begin direct flights to Miami, Porto, and Split. Fares are expected to start at €299 each way to Miami, €40 for Porto, and €70 for Split.

Dublin-Miami flights will be 3pw, Chicago to Dublin flights are to be increased to 14pw, Los Angeles to 7pw, Orlando to 4pw.  Chief executive Stephen Kavanagh predicted a 12pc boost in capacity for the airline next year.

The Miami service will also enable Aer Lingus passengers to connect via American Airlines services to destinations in the Caribbean, Latin and South America.

Aer Lingus will also launch services to Porto in Portugal, and Split in Croatia. The addition on the Miami service means Aer Lingus will operate 13 routes to North America using 15 aircraft

CEO Stephen Kavanagh said the airline is also increasing its capacity on the Dublin-Heathrow route, using slots at the airport that Virgin handed back to British Airways in 2013 when BA bought BMI. Virgin used them on domestic English services, operated on its behalf by Aer Lingus, but Virgin couldn’t make the routes pay.

Mr Kavanagh also said that Aer Lingus will soon announce an expansion of its services at Cork, which will also include additional Heathrow services, as well as extra services to continental Europe.

IAG said last month that the return on invested capital at Aer Lingus was 20.6pc over the previous four quarters. That’s the strongest in the group.

The airline said in a conference call last month it would benchmark transatlantic revenue per ASK by cabin against the legacy peer group coupled with cost leadership and leveraged retail opportunity.Stephen Kavanagh said Ryanair and Aer Lingus will be sharing revenue on transfer passengers from next year.

The city of Porto is known for tripe and port- the first because it was a place where meat was exported and more-perishable offal was consumed. The same, incidentally, is said of Marseilles and Cork: “the salters who barrelled up the meat for the long sea voyage were often paid partly in offal – creating a taste which survives to this day.” – Elisabeth Luard.

No prizes for guessing why a drink named ‘port’ might be associated with a wine-producing place called ‘Porto’. Split, not backwards in the history department, is the site of the Roman emperor Diocletian’s palace, the remains of which are integrated into the city itself.