Trending
You are at:Home»Aviation»Passengers from 13 connecting destinations join Aer LIngus inaugural from Dublin to Newark 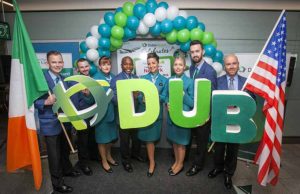 There were 161 connectors on board Aer Lingus’ inaugural flight EI101 to Newark, New Jersey, an Airbus A330-202, named St Caoimhe, which took off from Dublin airport at 12.55pm on Friday September 1st. 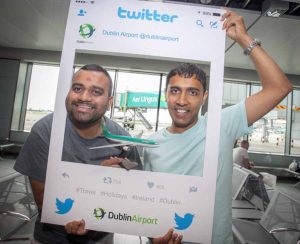 Arun Patel and Pragnesh Patel at the Aer Lingus inaugural

Newark is the second of three new transatlantic routes to commence this summer, marking the single largest expansion of Aer Lingus’ transatlantic network since the airline commenced transatlantic flying in 1958. A direct new service to Los Angeles, California, began in May and in late September a new four-times weekly service will commence from Dublin to Hartford, Connecticut. 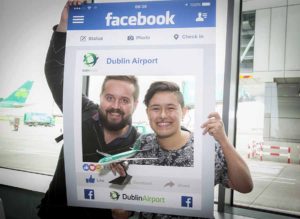 Santi Rodriguez and Angie Restrepo at the Aer Lingus inaugural

Three new transatlantic aircraft have joined the Aer Lingus fleet this year and as previously announced two new Airbus A330s will be delivered in 2017.

Declan Kearney, Aer Lingus director of communications, said: “We are delighted to commence our new direct service from Dublin to Newark, New Jersey. Together with our daily services to JFK from Dublin and Shannon, Aer Lingus now offers customers a choice of up to four flights to New York each day and by the end of this month, Aer Lingus will operate 28 daily services across the Atlantic. While we continue to connect Ireland to the world, we now play an increasing role in connecting Europe to North America and aim to be the number one value carrier across the North Atlantic. On today’s inaugural to Newark, more than half our guests began their journey outside of Ireland, starting out from UK cities such as Newcastle, Edinburgh, London as well as European cities like Brussels, Paris, Dubrovnik, to name but a few.”

Vincent Harrison, Dublin Airport managing director said the airport was delighted to welcome the second of Aer Lingus’ three new transatlantic services this year. “We have been growing our transatlantic traffic strongly at Dublin Airport and passenger numbers have grown by 62% on these routes between 2010 and 2015. We look forward to welcoming Aer Lingus’ new route to Hartford, Connecticut at the end of the month, providing further choice and flexibility for both business and leisure customers.”

Services available to customers on transatlantic flights include pre-clearance US immigration and customs at Dublin and Shannon airports; connections to onward destinations in the US with airline partners; hi-speed internet access; an extensive in-flight entertainment selection; gourmet meals including premium economy options and award-winning cabin service.