Trending
You are at:Home»Aviation»Aer Lingus the poster boy for IAG as it outperforms BA and Iberia in April

Aer Lingus has outperformed its sister companies in the IAG group, with double-digit growth in passenger traffic for April, and also year-on-year compared to 2016.

Revenue passenger km – the way in which airlines measure passenger traffic – grew by 26.6pc in the month of April, compared to April 2016. Iberia recorded growth of around half that – 13.4pc – while British Airways was lower still, at 6.4pc. Year-on-year, Aer Lingus was up by 14.8pc, while Iberia rose 5.6pc and British Airways recorded 3.2pc growth. 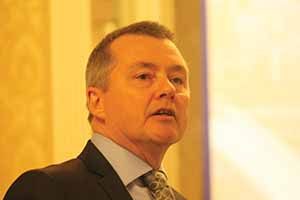 Willie Walsh, head of of IAG

And Aer Lingus also beat its sister companies in seat capacity growth, which was up 15.6pc, compared to 2.2pc and 2.1pc at the bigger Iberia and British Airways.

The figures were released as IAG reported its balance sheet for the first three months of this year. “We’re reporting an operating profit of €170m before exceptional items which is up from €155m compared to last year. This is a record performance in Q1 (first quarter of the year), traditionally our weakest quarter, with the improving trend in passenger unit revenue continuing,” said IAG boss Willie Walsh.

But Brexit is having an impact on the group, given the see-saw nature of the value of the British pound. “The impact of currency exchange was €32m in the quarter due to the translation of sterling profit into euros,” Mr Walsh said.

He also pointed to the legacy carriers’ group attempt to combat Norwegian and other low-cost carriers like WOW in the transatlantic market: “In March we launched LEVEL, our new longhaul low cost airline brand, which starts flights from Barcelona to Los Angeles, San Francisco, Punta Cana and Buenos Aires in June. It’s already been extremely successful with sales running well ahead of expectations.”