Trending
You are at:Home»Aviation»Aer Lingus relives the glamour days of aviation as 1940s DC-3 lands in Dublin

Aer Lingus has a new plane in its fleet – and welcomed a Douglas DC-3 into its Hangar 6 home at Dublin Airport.

The plane, hailing from the 1940s and 50s, has been freshly painted in the Aer Lingus livery of that era. It has been named St Gall which was the name of an Aer Lingus DC-3 aircraft from the 1950s and today’s DC-3 carries the same registration – EI-ACD – as its earlier counterpart.

Aer Lingus took delivery of its first Douglas DC-3 in April 1940, making it the fifth aircraft type to be operated by the airline and the first scheduled flight was a Dublin to Liverpool service on  May 7, 1940. A total of 19 DC-3s were in use by Aer Lingus until 1964, flying from Dublin to English destinations such as London, Manchester and Birmingham. The aircraft type operated its first Aer Lingus European service to Paris in 1946, with Amsterdam following in 1947. 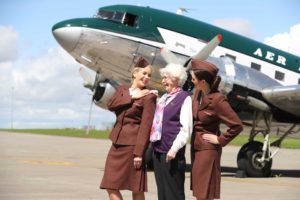 Margaret McLoone aged 88 from Rush, Co Dublin who was a former ‘air hostess’ with Aer Lingus and operated her first flight on a Douglas DC-3 in the 1950s.

While 32 passengers was the maximum capacity of a DC-3 aircraft, today, more than half a century later, Aer Lingus carries as many as 317 passengers across the Atlantic on its Airbus A330 aircraft. What was a fleet of a five aircraft in 1940, is today a fleet of 63 comprising largely of modern Airbus aircraft.

Aer Lingus marked the arrival of the DC-3 with a short flight over Dublin Bay and welcomed special guest Margaret McLoone from Rush, Co Dublin, who was a former Aer Lingus ‘air hostess’ from 1952-1955. Then known as Margaret Bergin, she operated her first flight on a DC-3 and even met her late husband Dinny on board who at that time was an Aer Lingus Second Officer.

Stephen Kavanagh, Aer Lingus Chief Executive, said, “This event gives us the opportunity to reflect Ireland’s proud aviation heritage, the tradition of service at Aer Lingus and to remember all those who have contributed to the success story that is Aer Lingus today.”

The DC-3 aircraft returned to Ireland at the invitation of The Irish Historic Flight Foundation (IHFF) who were eager to celebrate the DC-3 and its contribution to Irish aviation.

Eamonn Brennan, Chief Executive of the Irish Aviation Authority, said: “We are looking forward to seeing the DC-3 participating with the IHFF in two spectacular air shows over this coming weekend at Foynes and at Bray, as part the IAA’s ‘Aviation Ireland’ campaign.”