Trending
You are at:Home»Aviation»Air France’s Hop! to add 336 more seats per week on Cork-Paris route

Air France is to increase capacity by 24pc on its Cork-Paris Charles De Gaulle service, adding 336 seats per week. 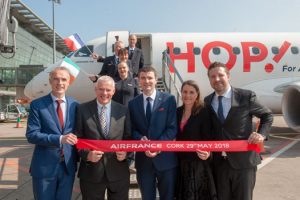 Air France began operating a daily flight between Cork CDG in May, on flights operated by its Hop! subsidiary. The route, initially announced as a seasonal service, was later extended to year-round due to positive bookings.

Bénédicte Duval, General Manager of Air France KLM for Britain and Ireland said: “The positive performance to date is testament to the economic recovery in southern Ireland and the investment Air France-KLM is making in this region. The extra capacity will offer our Irish customers more choice and connectivity, further facilitating growth in both the inbound and outbound markets.”

The Managing Director of Cork Airport, Niall MacCarthy, said: “The deployment of a new Embraer E-190 aircraft, resulting in increased capacity on the Cork-Paris route this winter, is testament to Air France’s confidence in the route and the support it has enjoyed in the past six months.”