Trending
You are at:Home»Aviation»Airline poses new threat to Irish pre-clearance trade to the US

Dublin and Shannon’s pre-clearance transfer business from Britain onwards to the United States faces a new threat after Virgin Atlantic said it would be the first British airline to participate in the United States’ TSA Precheck programme.

The announcement comes a week after Manchester Airport said it is aiming to offer pre-clearance facilities for its transatlantic passengers, something enjoyed solely in Europe by the two Irish airports.

Now Virgin passengers who have enrolled in TSA Pre can skip security queues when leaving US airports. The airline said the average customer with TSA Pre spends less than five minutes when travelling through US airports such as New York’s JFK.

The number of passengers transferring at Dublin alone increased by 23pc last year to a record 1.2m. Dublin Airport was the fifth largest airport in Europe for North American connectivity in 2016 after Heathrow, Paris, Frankfurt and Amsterdam. 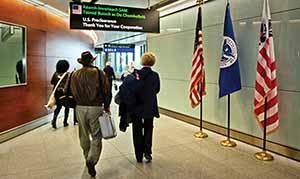 Virgin said in a statement: “With TSA Pre, there’s no need to remove shoes, light jackets, or belts. Laptops and compliant liquids can also remain in hand luggage, making the trip through security at the airport a breeze.”

Qualifying customers who enter a valid Known Traveller Number or Customs and Border Protection-issued PASSID in their Virgin Atlantic reservations and are pre-approved will then see the TSA Pre indicator on their mobile or printed boarding passes. Eligible customers will then be led to TSA Pre lanes within an airport’s security screen area to proceed through an accelerated screening process.

“We’re thrilled to be the first British airline to offer our customers the ability to expedite their security screening process in the US using TSA Pre,” said Mark Anderson, executive vice president, customer, Virgin Atlantic.

But there’s still a major plus for Irish airports: the cost of using the Virgin service. British customers must join the US Global Entry Service, which costs $100 plus a £42 fee to Britain’s Home Office, to be eligible to use TSA Pre.