Trending
You are at:Home»Afloat»Feargal Barton of Bartons Transport: All of Ireland will suffer if Dublin Port cuts back on cruise ships,

He said that although he understands Dublin Port’s position that cargo operations are its bread and butter, there’s a bigger picture at play.

“Cruise is only 2-3pc of their business, so it’s not going to be high on their priority list and if there is a shortage of space you can see why cruise liners are being pushed to one side,” Mr Barton said.

But he said “whether the economic case can be made on the port side … for Ireland Inc side it’s a massive, massive blow”. 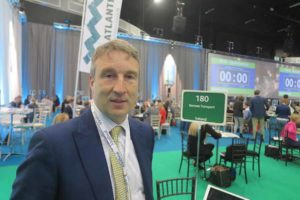 He said the cruise sector is worth around “€50m-€60m a year and is growing, with the turnaround of ships in the last few years”. He said the decision of the likes of Celebrity to homeport in Dublin – something  the port has “gone and fought hard to get” – was a “big coup for Ireland and Dublin Port to get”.

He argued that although “there’s no question that potentially small or medium cruisers would re-roster and just take in Cork or Belfast, for the larger cruise ships – the Princesses or Celebrities – Ireland is sold as a product… They simply will not sell Ireland as a product if they cannot be sure to get into Dublin.”

Dublin Port has itself said that from 2024-25, once major construction works on a 400-metre quay wall have been completed, cruise calls will increase to 150.

Mr Barton is a member of the All-Ireland Cruise Ship Action Group, a group of businesses across the tourism, retail and transport sectors who have come together to campaign against what it calls “the Dublin Port Company’s surprise ban on cruise ships entering Dublin Port from 2021”.

Mr Barton said:  “I’m one of the main suppliers. We work for Excursions Ireland and they in turn work for the large cruise lines.”

He said that mixed messages are coming from Minister Shane Ross’s office and the port.

Mr Barton said Shane Ross assured tourism partners that the port is not “not stepping away from cruise business”, with a temporary reduction in cruise calls.

He said any reduction in ship calls will be a major blow to his business. “Over the next two years we’ll be looking at 150 cruise liners in Dublin. On a busy day in Dublin we could have 40 or 50 vehicles hired in from ourselves and other operators from all over the city and even outside from Meath and Kildare and even as far as Carlow and Louth. That’s a massive blow to all these small operators.”

Action group spokesperson Niamh McCarthy, Chief Executive of Excursions Ireland, claimed the port’s decision will ‘’devastate Irish tourism and is driving a death nail into our business. Last year, cruise ships brought over 442,000 visitors to Ireland and generated over €50m for the Irish economy. If Dublin Port is allowed to go ahead with its plan, all of this will be lost forever. We are calling on Government and the Minister for Transport, Tourism and Sport to take immediate action to protect our jobs and businesses.’’

She said that Dublin Port has disbanded Cruise Dublin, pulled out of Cruise Europe, Cruise Ireland and Irish Tourism Industry Confederation and are not attending any cruise industry trade shows.