Trending
You are at:Home»Afloat»Aqua park & new restaurants for Royal Caribbean’s Adventure of the Seas 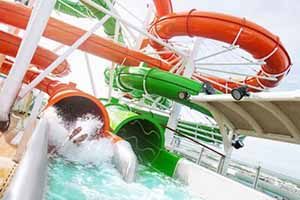 Royal Caribbean’s blog has revealed that the cruise line is to add water slides, an aqua park and its popular Izumi Asian restaurant to Adventure of the Seas during the ship’s November dry dock. The culinary additions will require an extra charge.

The  cyclone and typhoon water slides, which can also be found on Liberty of the Seas and Harmony of the Seas. The Tidal Wave water slide onLiberty of the Seas, which has yet to open since being installed in January due to design flaws, will not be added to Adventure. FlowRider surf simulators and the family-friendly Splashaway Bay aqua park will also be added

The Izumi Asian restaurant, popular with Royal Caribbean cruisers for its sushi and cooked Japanese dish, is to be installed and dry-aged steaks will be added to the menu at premium restaurant Chops Grille. The cruise line says: Dry-aging beef takes time, usually 21-28 days, and as a result costs more money because the restaurant ties up cash in inventory that’s just sitting around, losing water weight and literally shrinking