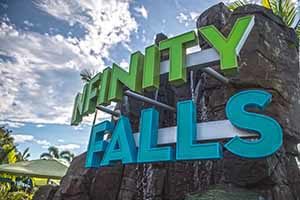 Seaworld Inifinty Falls are to officially open Thursday October 4. The rafting adventure is intended to simulate whitewater rafting through a rain forest, complete with 40-foot plunge over a waterfall opened at SeaWorld Orlando over the weekend in “soft opening” mode, in which it opens sporadically through the operating day.

A media event to officially launch the ride with full-day operations will take place on Thursday. It was previously scheduled to open this summer.

The roughly four-minute ride begins with an elevator that will lift each eight-passenger raft, then launch it into the river. It is located between Nautilus Theater and Shamu Stadium in the former SEA Garden.

The written release says: “Infinity Falls features roaring rapids, soaking fountains and a record-setting 40-foot waterfall drop, all against the backdrop of a rainforest utopia. Get ready to drop, scream and get soaked.