Trending
You are at:Home»Aviation»Avolon closes on $4bn fleet sale by rivals CIT to bring fleet size towards 790 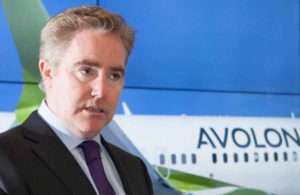 Dómhnal Slattery’s Avolon is among the contenders to acquire $12bn of aircraft assets being sold by US financial group CIT.

US-based CIT is selling its aircraft leasing division, which has its main office at George’s Dock in the IFSC, in Dublin and operates in 50 countries, and its portfolio of 350 aircraft.

A decision on second-round bids are due next week after first round bids reportedly came in at $4bn.

Avolon, founded in 2006 by Slattery, John Higgins, Tom Ashe, Andy Cronin, Ed Riley, Dick Forsberg, Pat Hannigan and Simon Hanson, is the world’s fourth-biggest aircraft lessor with an active fleet of 220 owned and 22 managed aircraft and another 199 aircraft on order.

The group employs 102, has six world offices, 84 airline customers including Delta and Etihad, and claims to have the youngest owned fleet among the top ten lessors.

Avolon was bought by Bohai Leasing, a division of China’s HNA conglomerate, for $2.5bn last year.