Trending
You are at:Home»Travel Trade News»Basque-ing in gastronomic glory, Bilbao hosts the trade in Dublin 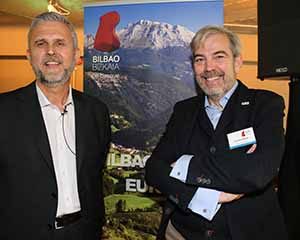 Hiria, Ura and Natura’ (city, water and nature) was the theme when Bilbao and Bizkaia hosted the trade at Andrew Rudd’s newly-opened restaurant, Medley, on Dublin’s Fleet Street East.

Gastronomy specialities on offer included Txakoli wine and Pintxos, tapas style bites prepared by Daniel García and Jabier Gartzia, two of Bizkaia’s many Michelin-starred chefs. There are 29 Michelin starred restaurants in the Basque region with nine in Bilbao.

Bilbao highlights include the iconic Museo Guggenheim,home to works by Andy Warhol and Jeff Koons among others; the 45 metres high Puente de Vizcaya Bridge across the Nervión River, which is a UNESCO World Heritage site and the world’s oldest fully-functioning transporter bridge – it offers panoramic views from an aerial walkway; the Euskalduna Concert Hall, which has one of the largest auditoriums in Europe and hosts regularly performances from world-class artists. Other city highlights include one of the world’s top five most valuable classic car collections at Torre Loizaga, which houses 45 mint-condition Rolls-Royces; and numerous other museums and cathedrals; as well as the Mercado de la Ribera, Europe’s largest indoor market.

Surfing is on offer at Mundaka, where four metres high and 400 metres long tubes that have hosted Kelly Slater and other champions at the World Tour nine times. Mundane is an attractive seaside town.

With the Basque Mountains to the south, the coastline of Bermeo to the north, the Urdaibai UNESCO Biosphere Reserve. Activities include Oma’s Enchanted Forest and the Pozalagua Caves. The caves include a collection of rare helictites (eccentrically branching stalactites).