Trending
You are at:Home»Aviation»Champagne in Economy: Air France bringing frills to cabins in upcoming makeover

The airline said it’s a push upmarket, with Anne Rigail, EVP Customer, telling Travel Extra that “the meal is inspired from business class in this premium economy”. The biggest changes are noticeable in the Premium Economy cabin, with business class-style seats, Sky Priority boarding, noise-cancelling headphones and 40pc more space than in Economy. 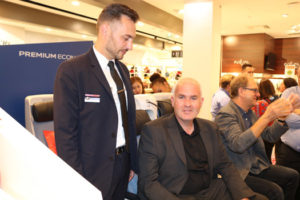 “We say goodbye to the customer with a sweet, we have new cutlery and trays and also from November will offer a second meal at the end of the flight – much more qualitative – in a trendy bag. The customer will choose to eat or take it with them if they’re not hungry. We want the experience that it feels like at home.”

Launched at the upmarket BHV Marais store in central Paris, she said the airline is appealing to its vast majority of passengers. “90pc of our long-haul passengers travel in Economy and Premium Economy, representing more than 14m passengers.. we have invested over €150m in the new cabins”.

For now, the retrofit will be on its A330s, with 15 in the fleet. “We have 7pc more seats, we are taking four seats in business and adding 20 in economy,” she said, adding that there will be more space in the cabins despite this. Food-wise, she said there will be a “French-style meal, accompanied by a selection of rigorously selected wines and champagnes”, even in Economy.

The full service rolls out from January, and will be used on routes to North America, Africa and China. “From next summer it will be India, and we will be opening Dallas next summer in the modernised A330s.”