Trending
You are at:Home»Ireland inbound»How church gave its blessing for Ian Paisley to join Mrs Brown and The Simpsons at Wax Museum

With its new home in the centre of Dublin, the National Wax Museum Plus is the one place in Ireland where you can catch Jack Charlton, Hannibal Lecter, SpongeBob SquarePants and Tina Turner under the one roof.

The new home, which will be served by its own Luas stop at Westmoreland Street beside O’Connell Bridge, opened this week. The late Dermot Morgan‘s son Don and grandchildren Dermot and Peter were guests of honour as a new wax sculpture of the Fr Ted star was unveiled.

One of the most unlikely stories surrounding the centre is the inclusion of the late Rev Ian Paisley in the Good Friday Agreement room, along with Gerry Adams, Bertie Ahern, John Hume, John Bruton and Albert Reynolds. Paisley’s Free Presbyterian Church gave permission for him to be included on one condition: that they got another Paisley sculpture of their own. “Yes, one had to be made for his church,” revealed museum director Paddy Dunning. 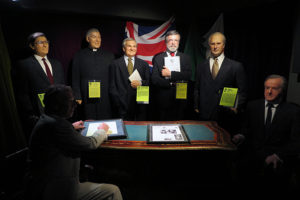 Good Friday Agreement at the new home of the National Wax Museum Plus on Westmoreland Street, Dublin

Areas are designed for children (filled with Simpsons and Co; Star Wars; Harry Potter; and The Lord of the Rings), and for adults, the over-16s-only Haunted Hotel area featuring characters from movies such as Saw and Nightmare on Elm Street. Those brave enough can stay at the Wax Museum until the later closing time of 10pm, said Mr Dunning.

“Not many people realise that Madame Tussaud set up her first wax museum – in Ireland – in 1803″, said Paddy Dunning, and that was decades before her world-famous London exhibition was established. Along with waxwork models, there’s plenty of history on show for school groups, including exhibits on the Irish people who invented the submarine, the commuter railway and the ejector seat.

Many of the Irish-crafted models (Conor McGregor is on his way soon) are interactive, said Marketing Executive Laoise Keaveney, with a smartphone app available to tie in with tours.