Trending
You are at:Home»Aviation»Cityjet take over of Stobart will be complete by mid-November 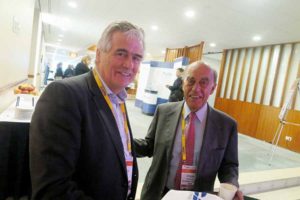 Pat Byrne Founder and CEO of Cityjet and Rigas Doganis of European Aviation Club at the PATA/ACTE aviation summit in Amsterdam, October 27 2016

The takeover of Stobart by Cityjet will be completed by November, all going well, according to Cityjet founder and CEO Pat Byrne.

Speaking to Travel Extra in the margins of the PATA/ACTE aviation summit in Amsterdam, Pat Byrne said that the airline was looking at deals in several European countries based on the contract flying model that Cityjet operates with SAS Scandinavian and Stobart operates with Aer Lingus. One big contract under discussion at present will untilise most of the airline’s Sukhoi Superjet SSJ100, the first airliner in which engine and airframe have been designed together to optimize performance.

Cityjet took possession of their third SSJ100 on Thursday Oct 27, EI-FWC. It will go to an airshow in China and will return to Dublin on November 8.

Pat Byrne said it has not been decided whether both airlines will retain their separate identities after a protracted takeover process kickstarted when Invesco Perpetual decided they wanted to offload their shareholding in the former Aer Arann, triggering a similar response by Stobart.