Trending
You are at:Home»Aviation»Cobalt Air aims for three Cyprus flights a week from Dublin and to open in another Irish airport

Cobalt Air is aiming to run three flights a week from Dublin Airport to Larnaca next year and start operations in another Irish airport.

That’s the aim of the airline’s Limerick-born Head of Marketing & Ancilliary Revenue, David Lee, who was speaking in a joint event by the airline and the Cyprus Tourism Organisation in Dublin.

“We’d like to get to three flights a week – that’s a real goal for us,” said Mr Lee. He was speaking at the official launch of Cobalt’s year-round service between Dublin and Larnaca, with flights on Wednesdays and Saturdays. “We’re also looking at a regional Irish airport for flights too.” 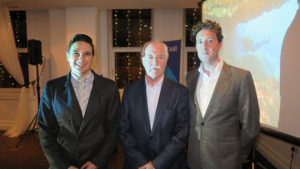 The airline is also keen to make the island a mini-hub for the region, and has 16 other destinations, including Tel Aviv, Beirut, Moscow Sheremetyevo and Athens.

Load factors between Ireland and Cyprus are already good, Mr Lee told Travel Extra, from 60pc to 70pc-plus in the winter season alone. This year’s flights, which started in March 2017, have seen over 2,000 seats per month between the two countries. Cobalt Air ticketing is handled in Ireland by Paul Nolan’s APG Ireland.

The airline sees plenty of potential in the market, after Irish numbers to the third-biggest Mediterranean island plummeted from highs of around 70,000 in recent years due to the lack of a dedicated air connection. Figures for this year to date are just 6,525 – which is a 69pc rise on 2017 – but still way behind the biggest market, Britiain, which supplied 1,174,358 visitors, up 11.2pc on 2016. Visitor numbers overall are up 13.9pc at 3,186,531.

The trade and media event, held in Dublin’s Fallon & Byrne, was attended by Cyprus’s Ambassador to Ireland, Costas A Papademas, hoteliers from the island, and Marios Erotokritou, Information Officer at the Cyprus Tourism Organisation. He said that the island has 64 Blue Flag beaches, seven wine routes and a good stock of hotels in the three to five-star range. Weddings are also big business, with 7,619 people tying the knot on the island last year alone. Connect to pictures from the event here or on Facebook here.