Trending
You are at:Home»Travelextras»Copenhagen tops rankings of most expensive city in Europe, Dublin & Belfast 5th & 18th 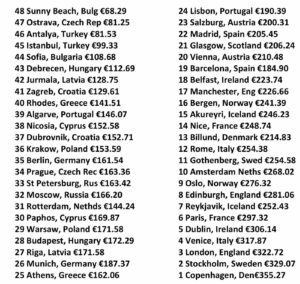 The Danish capital of Copenhagen has topped the list of the most expensive cities in Europe in a survey by resort transfer company Hoppa.com.

At the opposite end of the scale, Sunny Beach in Bulgaria was ranked as the cheapeast city on the continent.

Hoppa researced prices of hotel rooms, bottles of wine, a pint of beer, cinema tickets, taxi fares, cinema tickets and cocktail to give an average city price across 48 countries, using two cities per country for the survey.

These costs were accumulated to give full rankings on costs. Copenhagen came in with a nightly holiday cost of €355.27, while Sunny Beach cost only  €68.29 on average, a startling difference emphasising the value of eastern Europe as opposed to the high costs of Scandinavia.

Behind Sunny Beach at the budget end of list was Ostrava of the Czech Republic costing just €81.25. Two Turkish cities, Antalya – although technically located in the Asian part of Turkey – followed by Istanbul were next cheapest at €81.53 and €99.33 respectively. The last of the cheapest five was again in Bulgaria with Sofia costing €108.68 a night.

In terms of hotel accommodation, Copenhagen again topped the list with a price of €224.87 per night. Sunny Beach again was the cheapest place to lay your head at €40.09.

The most expensive city to eat in was the Icelandic city of Akureyri, where an average meal cost is €119.95. By stark contrast Jurmala of Latvia cost just €14.34 per meal.

The famously expensive London was the most expensive for a night at the cinema, with a price of €27 for two tickets, while Debrecen of Hungary cost just just €7 for two tickets. London and Debrecen were also top and bottom of the scales when it came to coffee, a cup in London cost a whopping €13.50 on average.

London was again the most expensive city when it came to taxis, with a cost of €3.50 per 1km taxi fare. Getting around Russia by taxi proved to be cheapest, with Moscow and St Petersburg ranking at 28c and 35c per journey respectively.