Trending
You are at:Home»Travelextras»Counting the cost: What was lost in Brazil’s National Museum fire 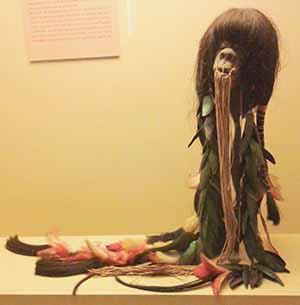 Shrunken head of the Jivaroan peoples.

The fire that engulfed Brazil’s National Museum destroyed some of the most important material records of ancient American civilisation, natural science and anthropology in Brazil.

Although some items were saved, it is believed that 90pc of its 20m objects were destroyed in the fire. Items stored in a separate building were not damaged.

irst responders fighting the fire were hindered by a lack of water. Rio’s fire chief claimed that two nearby fire hydrants had insufficient water, leaving firefighters to resort to pumping water from a nearby lake.

The famous Bendegó meteorite, survived the fire. Among the items lost were valuable pre-Columban artefacts, of Andean mummies and the Peruvian textile from the Chancay culture depicting birds. Huaca del Sol, and a Shrunken head, mummified by the Ecuadorian-Peruvian Jivaroan peoples.

The collection of Egyptian archaeology of the National Museum iwas the largest of Latin America and one of the oldest in the Americas. Most part of the objects entered the museum collection in 1826, when the tradesman Nicolau Fiengo brought from Marseille an assemblage of Egyptian antiquities that belonged to the famous Italian explorer Giovanni Battista Belzoni, who had been in charge of excavating the Theban Necropolis (modern-day Luxor) and the Temple of Karnak. 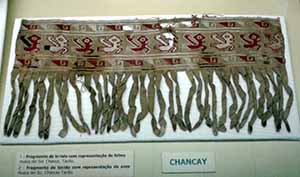 Textile from the Chancay culture

Also lost is a a set of four frescos from Pompeii, made around the 1st century AD. Two of those are decorated with marine motifs, respectively depicting a sea dragon and a seahorse as the central figure surrounded by dolphins, and had adorned the lower walls of the room of the devotees at the Temple of Isis. The other two frescos are decorated with representations of plants, birds, and landscapes, stylistically close to the paintings of Herculaneum and Stabiae. The museum also houses a large number of objects from Pompeii portraying the daily life of Ancient Roman citizens: fibulae, jewels, mirrors, and other pieces of the Roman female toilette, glass and bronze vessels, phallic amulets and  oil lamps.

The fire follows five years of neglect. From 2014, the Museum faced budget cuts that dropped its maintenance to less than R$520,000 annually. The building fell into disrepair with visitors noticingpeeling wall material and exposed electrical wiring.  By June 2018, the Museum’s 200th anniversary, it had reached a state of near-complete abandonment.

One Tripadvisor review from 2016 described the museum as in need of some serious love. The place is literally falling apart, with yellow tape to prevent using the marble bannisters. The collection is interesting–some of my favorites in the photos but many, many canvasses need restoration/cleaning, it is sad, sad, sad that a NATIONAL museum of art is in such sad shape. Another described it as as an undiscovered gem in Rio. It has so much information on a wide variety of topics, including dinosaurs and other extinct species, the history of Brazilian monarchs, animals, palaeontology, the history of the world, space and the universe, and a massive set of exhibits dedicated to native Brazilians. A review from 2012 said:Could be a great place if well maintained. It is in tatters, though

Collected over two centuries through expeditions, excavations, acquisitions, donations and exchanges, the collection was subdivided into seven main nuclei: geology, paleontology, botany, zoology, biological anthropology, archaeology, and ethnology, the museum also held one of the largest scientific libraries of Brazil, with over 470,000 volumes and 2,400 rare works

The first collection accumulated around the House of Natural History, popularly known as Casa dos Pássaros (“House of the Birds”), created in 1784 by the Viceroy of Brazil, Luís de Vasconcelos e Sousa, 4th Count of Figueiró, as well as collections of mineralogy and zoology.

The Museu Nacional was located in the Paço de São Cristóvão (Saint Christopher’s Palace) inside the Quinta da Boa Vista park, in the city of Rio de Janeiro, which served as residence for the Portuguese Royal Family between 1808 and 1821 when they fled the Napoleonic invasion of Portugal. The building housed the Brazilian Imperial Family between 1822 and 1889, and also hosted the Republican Constituent Assembly from 1889 to 1891, before becoming a museum in 1892.