Trending
You are at:Home»Afloat»Cruise Europe in Dublin hears that Western European ports are in a happy place 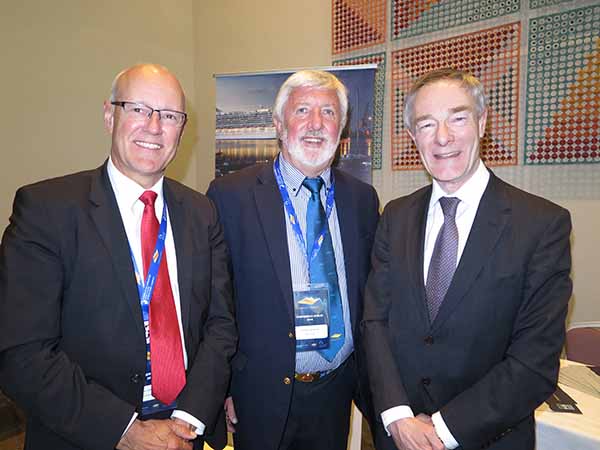 Mike McCarthy and David Dingle at the Cruise Europe conference in Dublin, june 1 2016

Delegates from 20 countries and 120 member ports at the Cruise Europe conference in Dublin heard that Western Europe was regarded as a safe destination at a difficult time foe cruise lines.

Watch here interview with Mike McCarthy, the man who made it happen. David Dingle gave an overview of the industry which showed that cruise order books are full until 2021 with 61 ships worth $40bn on the order books.

Watch here interview with Helen Caron of TUI Cruises speaking at the Cruise Europe conference in Dublin in advance of the launch of TUI Discovery.

Cobh, which is anticipating 58 cruise ships this year, plans to refit its cruise terminal at a cost of €10m. Dun Laoghaire has plans to extend the berth by 333 metres to accommodate up to 100 ships a year. Last year was a bad year for Dun Laoghaire when weather caused the cancellation of visits from ships scheduled to tender passengers off.

Picture shows Mike McCarthy and David Dingle at the event. See more pictures here or connect with the album on Facebook.