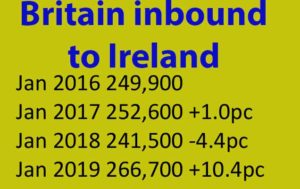 January figures ran ahead of aviation capacity increases, which is unusual but sometimes happens off a small base.

The figures for Britain, up 10.4pc, are astonishing considering the airports say traffic between the islands is flat and, encouraging as this growth is, figures are still shy of those before pre-Brexit uncertainty. Europe, at 12pc is also ahead of airport records while N America at 14pc is similar.

Europe by growth in numbers and N America by growth rate will continue to be the headline stories of 2019 for Irish tourism, as Britain falls away.

Growth is likely to drop, to a more realistic 4pc from the breakneck 11.2pc the CSO reports for January, as figures for the big-ticket months of summer become materialise.

The total number of overseas trips made by Irish residents during January 2019 decreased by 2.0pc to 536,900.