There is a special moment on every journey. It happened at five to three on a Tuesday afternoon last August, at the point where the salt water of the Hudson Bay and, by extension the Arctic Ocean, crashes into the warmer, clear water on the huge Churchill River (I didn’t realise how huge but it is a thousand miles long), meeting the salt and the first shock of the Arctic Ocean.

Scores of Beluga whales come to warm themselves in the river water. They had found a school of fish. You could tell because the arctic tern were diving from above in search of the same buffet table. The whales, three or four dozen of them, began to porpoise around our little zodiac boat.

We could be bouncing along in the middle of a Nat Geo documentary, except pictures and video do not do justice to the experience.

The whales congregated around us like a chorus line. The older ones pure white like Kildare football supporters, the younger ones grey and nervous, and they danced and dived, their eyes, their blowholes, their find and their laughing faces all clear as day to see.

Then we dived. A mother nosed my flippers and toes and then her baby did the same. I got the feeling she had come to look at me, rather than the other way round. 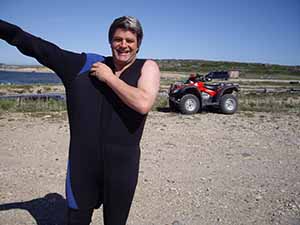 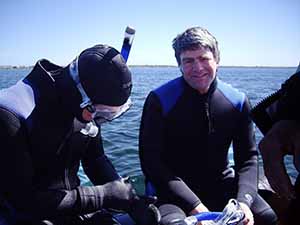 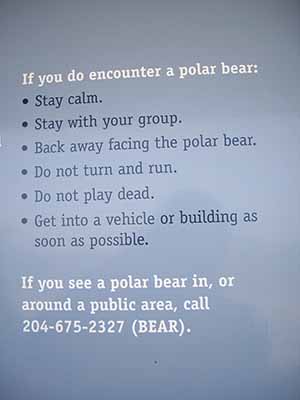 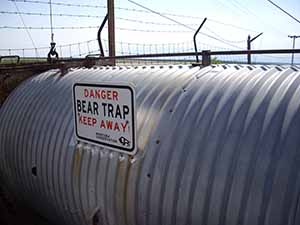 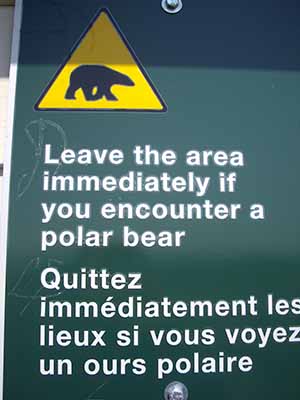 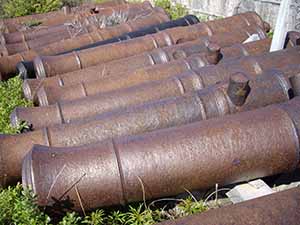 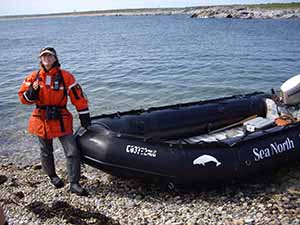 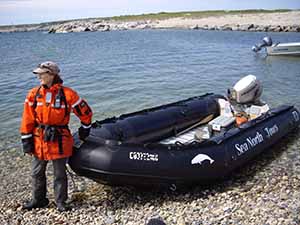 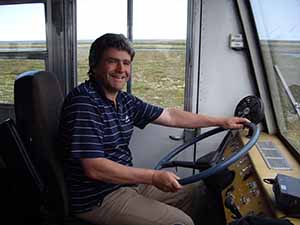 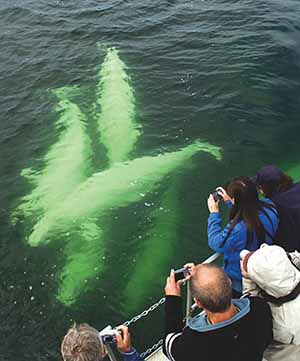 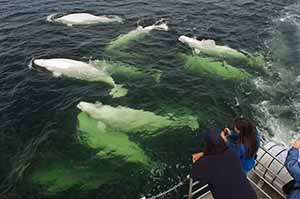 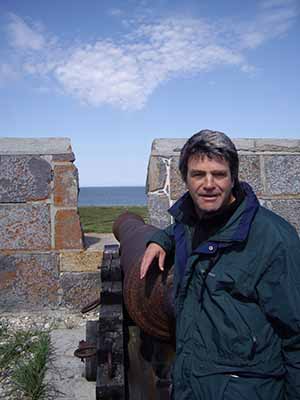 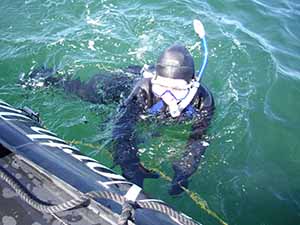 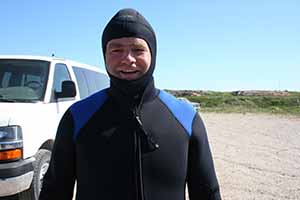 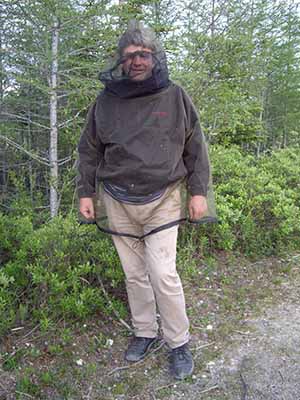 Travel Extra editor Eighan Corry battles with mosquitoes in sub-Arctic Canada, Churchill, Manitoba, July 6 2011, in a borel forest just at the fringe of the tree line 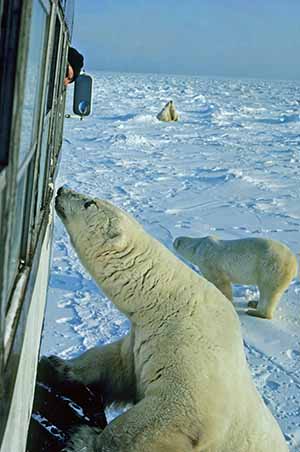 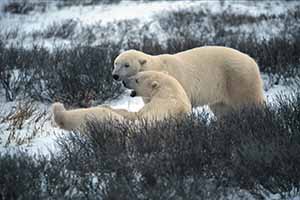 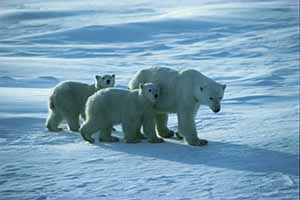 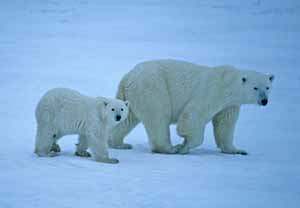 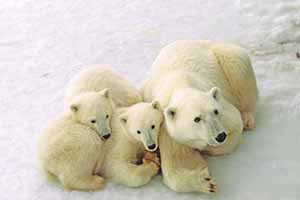 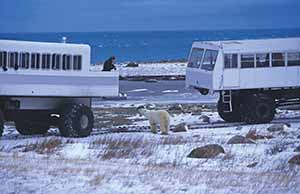 Later we are travelling with a group of Belugas in pursuit when the report comes in of a two year old male polar bear near the coast. The bear is wandering out to the headland near the ancient fur-trading fort. The bear is oblivious to his aquatic viewers, and this is as good a sighting as we could imagine.

The first polar bear was saw was somewhat in the distance and bedraggled. A hungry type that might not make it to next winter. But he was there, big and white and a polar bear. What more can you say.

There were other bears yesterday, a trio dining on what appeared to be a whale through the binoculars.

There were 1300 polar bears in the western Hudson 40 years ago, According to Duane Collins the Canada Parks interpreter and co-ordinator in the in the historic train station which is now the Canada parks interpretative centre. Now there are just 950, a significant proportion of the 1,400 who survive in Canada.

With global warming there are three weeks less ice a year than there used to be 40 years ago. Every week off the ice affects the weight of the polar bear by 10 kilos.

With global warning bears are getting hungrier, and hungry bears are dangerous.

In the Tundra Inn where I stayed I met a railway worker Wayne MacRae, who went to the beach the previous day to take photographs. He was chased by an injued bear which had to be killed by the conservation department, and was lucky to escape with his life.

They invented a way to watch polar bears up here, by sticking two giant tractor wheels on an old school bus to make something called a tundra buggy. You can merrily drive out among the bears and photograph them without fear.

Even then there can be injuries. A local nurse told me of the photographer who lost an arm when he leaned out of the buggy, oblivious to the bear that was directly below.

Churchill is the only place on the planet it is illegal to lock your car. The reason is there are 950 polar bears around the Western Hudson and they cluster here because it is last place to freeze and first to ice up again.

The “Churchill Flag” is the name they give to the few twiggy willow and pine trees that are here, a little north of the treeline (which is marching north due to global warming) their branches all extend to the south. This is because they are covered with snow up to about ten feet, but also the north wind shifts protective snow and lashes the trees with ice particles. The result is they all point south, a welcome help to any stranded navigators.

Navigators were always getting stranded here. Lady Franklin even sent a stained glass window to the local church, as she waited for the hubby (John Franlin: (“the man who ate his boots”) to come home. When Dane Jens Munk wintered here in 1619 and decided, reasonably enough, that he would be safe because he was on latitude 58 degrees, similar to the top of Scotland, he finished the winter with just two survivors out of his crew of 64. Hudson (of the Bay and the river in New York) disappeared.

This places makes me feel like disappearing myself, the wilderness is haunting and deliciously expansive, the roads all stop within a few kilometres.

When the snow falls you can go on forever in a snowmobile, as one local put it “the playground expands.” Except you cannot walk because of the bears and another important and more acute predator: the mosquito.

I thought someone was having a laugh at my expense when I was given a jacket, the Coghlan’s bug protector, which looks something like a beekeeper’s suit, with a net that goes over your face.

A short walk in the boreal forest on the fringe of the Arctic treeline convinced me I was mistaken.

They descended on us during an otherwise pleasant husky ride, so much that the buzzing sounds and the attack flight path comes to dominate the whole experience. They call it the Churchill Wave, the hand flicking as you walk through the street.

The caribou can lose a pint of blood a day to these critters.

“What is the difference,” Duane Collins asks, “between Caribou and reindeer? “ He barely waits before answering: “reindeer can fly.”

Bears, belugas and blooms, was the theme of my visit to Manitoba. You could add bugs to that.