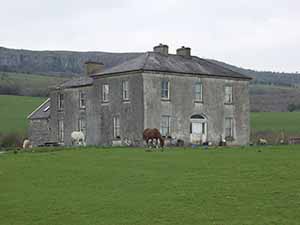 You can almost hear the theme music in your ears as you enter the gate of the Father Ted house in the heart of the Burren.

The house, and its magnificent backdrop (to which the cameras never quite did do justice) is as familiar as my relatives’ homes, which may be because so many of us recognised at least one relation among the cast of the Craggy Island drama.
Cheryl McCormack, the Maitre D of Glanquin House (the correct title, although everyone calls it Father Ted House), has a tale to tell as fascinating as any of the comical clerics.

At 25 years of age she came on holiday to Ireland, fell in love with the landscape and a handsome 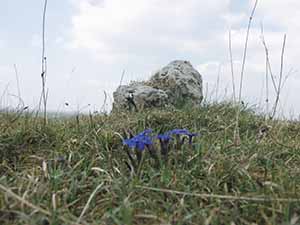 Irish farmer in one stroke of cupid’s arrow, and now lives in Clare with their five children.

Pat McCormack is now one of eight Burren farmers who came together last year to provide Farm Heritage Tours o
n their land.

The interior of the house never appeared on the telly but it scarcely matters. Cheryl McCormack has the kitchen table groa
ing with scones and cream and jam, and tells me that tourists can book ahead and she will do a Mrs Doyle tea for a tenner.

Her husband has an even more exciting venture to announce. He is one of ten farmers who will gather tourists at the Cusack centre in Carron daily this summer and bring them on eco-tours through the Burren, mixing farming, folklore, archaeology and anecdote in liberal doses and cooking up something as fulsome as Cheryl’s offering. 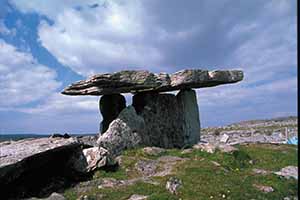 When ecotourism became a buzzword a decade ago the Burren was there. Each Over the last few years, an eclectic group of eighteen dedicated tourism businesses have been going through a rigorous training and assessment programme to be certified as one of only two ecotourism destinations in Ireland, their brochure filled with all the appropriate terms: “that establishing ecotourism in the Burren will ensure the sustainable development of its communities, 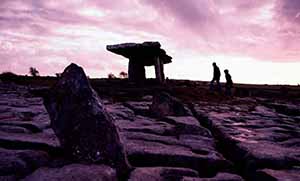 Tourists have always been attracted here. Landscape, heritage, flora, music attracted them. There are more archaeological sites per square kilometre in Co Clare than in any other part of Europe. And amid all the old stones and flowers that renew themselves every year.

The tourist season is marked by the first gentian, like first cuckoo or first swallow elsewhere, a small blue flower is associated with the Alps that has become one of the big symbols of the region, a signature attraction as delicate as the big witch-table Poulnaborne dolmen is solid and durable, as pastel as the rich orchids of summer (there are 55 in the Burren) are colourful. 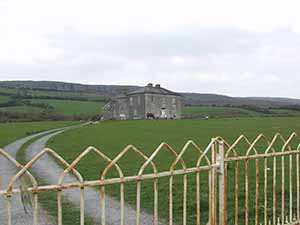 Each of the 26 businesses offers its own ecotourism experience, even the Afternoon Tea and Farm Walk at Father Ted’s is a wholly local offering.

John Davern who produces the milk for Ben Johnston cheese at the Aillwee Caves has Caherconnell stone fort and the school of archaeology on his farm, celebrating the ringfort near the family farm where his family kept a Brehon Law School for nigh on 1,000 years.

Over at the Kilfenora centre (open March to October), a defining tourist development when it opened in 1975, the tearoom and craft shop proudly support local produce.

In the centre, they keep every reference book they can source that’s up to date and published on the Burren. If your questions cannot be answered here, then go home

Later, Simon Haden in Gregan’s Castle, the AA Hotel of the year, hosts the launch of the venture in Ballyvaughan, in his exquisite forty bedroom hotel. It has a view that you won’t beat on the seven continents as the low sun works every shadow of the karst surrounding for what it’s worth. 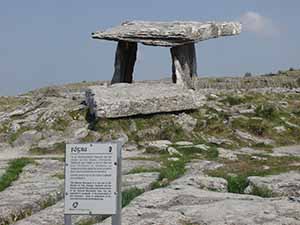 Gregan’s is low key, a family business that kept its integrity through the years of construction fuelled hotel development when the country was drowning in spas and bouncing in the bunker of green-fee excess.

“You are in the turf shed,” his concierge says, as he shows me to the Martyn suite, the sun bursting through each window. Politicians, poets, muses and musicians, hoteliers and home-makers gather for the launch while, this being Clare, the fiddlers play furio
usly in the background.

If you could plug the national grid into the energy in that room we could export the electricity.