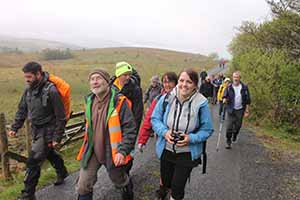 Historian Seamus Ó hUltacháin and Grainne O’Connor of Cavan County Council heritage office accompanying a group through the Cavan Burren, one of 30 events during This is Cavan Walking festival May 2-11 2014.

Historian Seamus Ó hUltacháin giving a talk at Giant’s Grave passage tomb in the Cavan Burren, one of 30 events during This is Cavan Walking festival May 2-11 2014. 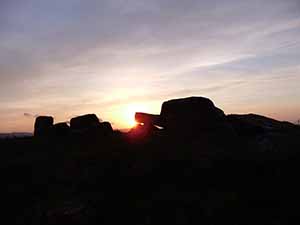 On a narrow road an undistinguished ruin, home to nothing except some avaricious whitehorn bushes, is the inn from which Blacklion got its name.

The local Irish speakers used to call it “An Bleac.” It is where the tourists of the 1700s used to stop, The Black Lion and the Red Lion were known for their ale and hospitality.

The inn which gave its name to the village isn’t even in the village any more but hospitality is still what they do.

Ask anyone about Blacklion nowadays and one name comes to their lips, Neven Maguire.

Most of the group thought there was one Burren in Ireland, Seamus contends this Burren is just as good. He says the Giant’s Grave is the finest wedge tomb on the island, more akin to the Breton allée couvert rthan the classic Irish passage tomb, the nearby Calf’s House portal tomb one of the finest.and again more akin to what is found in Wales.

He lightens the hike with anecdotes and introductions to The planting of forest may have saved many of the monuments here.

On the high points the land turns into blanket, the road bouncing through the bog, and the skyline of fog and cloud gets lower and lower until eventually you find you’re driving through a fairy mist that waves like a tea towel on front of you enticing to go a little further where something magical might just be about to happen. There are not many places in the world where clouds come to play with you at such close range with such amazing landscape revealing itself when the puffs of grey pass by or clear momentarily.

Here is a mountain that means what it says. The distant drumlins wear a halo silver and shining, spreading the horizon in directions that really should not be possible as the evening runs out of daylight. But this is Cavan, imagination is what they do.

And then, like the wind blowing the seeds of a dandelion away, the landscape changes and the fog lifts high to the soaring levels that mean you cannot notice the gray above the green.

Nearby is the sorce of the Shannon. The Shannon Pot has a pathway, fresh mown grass on either side, and some sheep to discard their organic waste and keep the tourists alert as to where they might put their Hush puppy shoes.

The Pot is the same dark pool of water that enchanted visitors 200 years ago (“a very copious spring”). There is some nonsensical signage that patronises visitors like they had come straight out of a screening of Darby O’Gill. It alludes to the subterranean activity around that suggests the real source of the Shannon is elsewhere, Tullynakeeragh Gravel lake, Sruth Crappa River, Aginrawn and Owenbream, enough to tempt people further the mountain, quite an appealing prospect both for the visitor and their tourism holds. The furthest away is Pigeon Pot, 10km away in Fermanagh.

For those living in the capital Ticknock has come to be a particular favourite, a really good 90 minute workout.

Perhaps the most beautiful walk locally is the Spink, a spectacular and challenging climb up through the forest at Glendalough to the cliff towering over the upper lake, along a ridge with wonderful views back towards the coast.

The Spink is almost like a city highway, with hiking clubs and families – mostly the new (and often Russian-speaking) Irish – enjoying the exercise and the beauty. At the far end of the Spink, the path descends to a mountain stream and the now idle copper mining village. This section is almost more challenging than the climb, as the path has disappeared and the surface is covered with rocks and scree, so threatening to those who are not sensible enough to wear proper hiking footwear.