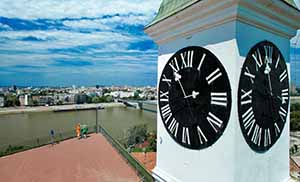 The castle of Novi Sad was built to impress whoever had to sit at the other side of the river. Usually it was the Austrians, when Serbia was the frontier of an empire. But it does a good job on Danube river cruisers nowadays.

Rivers matter in an inland state which Serbia has become in its latest life.

Serbia fell, or was banished, from the tourism map by the tragic events of the 1990s.Its second city turned to song to get it back there.

Novi Sad now stages a music festival in one of the most spectacular entertainment venues imaginable, the huge labyrinthine Petrovaradin Fortress, a massive Austro-Hungarian creation dating back to the 18th century when this was the frontier where the Ottoman and Hapsburg empires collided and sparked off each other. The festival is called Exit, it offers 600 acts on 20 stages.

Snoop Dog is one of the first performers. An aggressive publicity manager warns us that his press conference will be called off if anyone asks him about being arrested or smoking weed. Nobody does Instead the music writers ask some of the most sycophantic questions I have ever heard. “What is your favourite song from your own set?” (“good choice’ when he replies. As the press conference ends Snoop Dog calls out: “smoke weed.”

Serbia has re-emerged from the twilight zone in which it found itself over the past two decades, pilloried by the international community and bombed by the Americans.

It was late when we reach Belgrade and transferred to the Hotel Metropol Palace. We spend the evening in the trendy Belgrade port area, with a line of teeming lively restaurants. There is emotion everywhere, emotion enough to party.

The city is full of surprises. You can still see bomb damage in Kneza Milosa, concrete and glass beside the warped remains of warped steel like a Dali painting, and then more glass fronts, airy office lobbies and coffee shops. It is surreal.

Belgrade is good at recovery. Our tour guide Tanja Krkovic tells me Belgrade has been over run and destroyed 38 times in its history. It was bombed nine times in the 20th century alone.

There is a sense of aggrievement at every turn. They used to be the good guys who stood alone against fascism. Then they became the bad guys, like somebody flipped a coin.

Tanja is an interesting raconteur, the man who jumped into the bear pit beside the fortress to escape his enraged wife, the Royal mistress who killed a wife, Black George who led the revolution against the Ottomans, and the two squabbling Royal families that contested the Serb throne for a century.

She tells us how Serbia was once bread basket to the European imperial powers, the birthplace of 17 Roman emperors including Constantin.

After viewing the signature Kalemegdan fortress we lunched in the magnificent restaurant Šaran looking out on the river Sava, drinking Dark Kiksicko beer from Montenegro.

Russell Stenson of Serbian Tourism tells me the Hotel Bah has weekend packages for eu349, including flights.

Croatia has the beaches. Serbia has to work harder for its tourists.

After the song it was time for wine. Serbian wine producers, under orders from the Tito regime, used to emphasise quantity over quality. Not any more.

We headed off to Sremski Karlovic’s Vinarija Kis in the historic ecclesiastical centre of Sremski Karlovci where there are 20 wineries, and sample their most well known products. They include Bermet, the Vermouth of Serbia.

At the rural household “Perkov salas” on Fruska Gora, the farmer Mr Nikola talks of his 80 years of loving life. Wars, dictators, political systems, he has seen them come and he has seen them go. Song, women and wine, he says, endures..

The guide, Tanja Djurkic was a small girl when she had to flee her home in the dead It is a lot of emotion for a small place. Emotion everywhere, enough to party. That’s what survivors do.

Air Serbia, is the national airline of Serbia. There are good connections through Paris CDG with its partner Air France/Cityjet.

There are other ways to go – through Budapest with Aer Lingus or Ryanair is a favourite for the Irish, followed by a four hour Geatours bus journey eu30) to Novi Sad, or five hours to Belgrade. A taxi to Budapest from Novi Sad costs eu130, which can make sense when people are sharing. Beware of delays at the border.