Andorra has spent its entire history as an in-between place. Now it seems destined, at last, to become a ski destination in its own right.

The principality made its name as a playground for beginners after the first ski lifts opened in 1957, became all trendy when the Grandvalira was created in 2004 opening up 193km of piste, and then became a tad too expensive for the Irish who looked east to Austria, Italy and Bulgaria instead.

For 2012-3 Andorra is back. Prices have been reined in and the season is looking good. Better hotels and spas have been thrown alongside shopping into Andorra’s box. 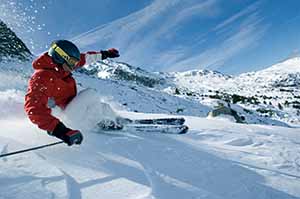 There were blue skies above when we reach Les Escaldes and the Hotel Prisma near Andorra la Vella, an unusually urban setting for a ski experience.

The town got its name from the numerous hot springs and we are here to sample the Caldea, a space age wellness centre near the little river. It is the reason to stay a few kilometres from the slopes, One nearby six-kilometre gondola run can get you up the mountains in 14 minutes.

Entry to Caldea is u39 to use the pools, u59 including treatments, offering five storeys of pools, treatment rooms, and saunas. There is a free bus from Arinsal for people staying on that side of the mountain and shops stay open until 8 o’clock at night, with great duty free prices.

It comes complete with a bizarre grapefruit pool, a small swimming pool with grapefruits bobbing around in the dark, something to help your skin, apparently. It doesn’t work. I tried. 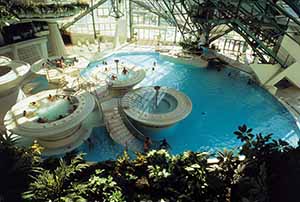 Soldeu is a good place to measure how far Andorra has come from the ‘bargains and beginners’ place it used to be.

A morning on the slopes shows what a good job they have done. As we lap up the kilometres around the resort there are some challenges and a few icy wobbly bits but the scenery makes it all worthwhile.

A line of Andorran kindergartners parade by in little suits with magnets on their back, to hold them on the ski lift. One day a week they get up the mountain to ski. What an education.

An Irish ski instructress. Lesley Boyd from Dundrum spends her winter here, and is one of the best tutors in the resort.

You can ski down to the little village of Pas de la Casa, throw a snowball into France and take the lift back up again, rattling along at the regulation 2.4 metres per second as the scenery unfolds around.

Then you can take the cable car over to Pal and throw another snowball at the Spanish border. 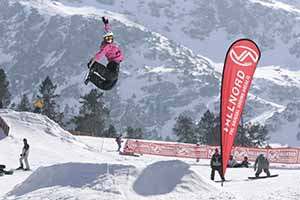 Barcelona has three direct flights a day from Dublin but Toulouse is a better transfer option.

Unless something gets lodged in the bridge at Prat de la Plau. But you don’t get to visit a mountain principality without having to go up the mountain.

The ski resorts have decided to offer their own, at 3.20 a day, or 45 for the season. It means no paperwork when you present with that sprained wrist, and they will have you strapped and back on the slopes straightaway.

Andorra won’t ever be Espace Killy but it has infinitely cheaper wine and better shopping.

Andorra has grown up, which is an achievement considering the top of Croagh Patrick is lower than the lowest point in the little principality. 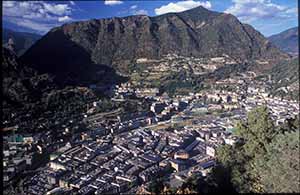 Topflight operates an Aer Lingus Charter programme to Andorra for the full ski season, from Dublin to Toulouse and from Cork to Barcelona on Aer Lingus scheduled flights. All flights operate on a Sunday to Sunday basis.

Aer Lingus schedule is on www.aerlingus.com