Three resorts in three days, even in the peep-and-flee world of travel journalism, seemed a lot to ask.

Saalbach, Zell an Zee and Bad Gastein are the Riviera of the Irish ski market, tried and trusted resorts Saalbach and Zell Am Zee are an hour apart and Bad Gastein a further 40 minutes down the road.

The mountain conditions are vastly different. A small change of wind can bring a big change. The resorts of Bad Gastein and Bad Hofgastein offer access to 200kms of ski slopes split over four separate areas. 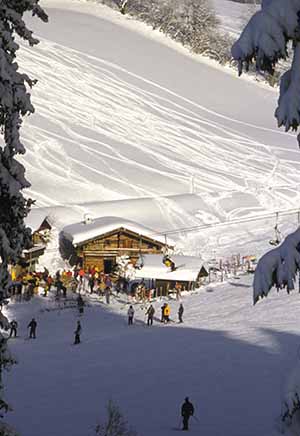 The warm winter of 2007-8 led to Saalbach investing Eu1.8m in snow machines. “No matter what happens we can now guarantee good skiing,” skischule director Hans Hinterholzer says. You get the impression that Saalbach is in control of its own destiny. The investment is provided by 12 local investors from the town’s hotels. Over by the Spielberghaus they offer tobogganing down the slopes.

Karin Pasterer from the tourist board accompanied us around Saalbach, and ski instructor Kostadinovic Nemanja brought us into the icing-cake Kohlmaiskopf, the most spectacular of the 180 km on offer, served by 60 lifts.

At Christmas and mid-term they can bring 70,000 people on to this mountain with new fast lifts bringing them from 3,000 to 6,000 feet. Notably the dreaded drag lift on the lower slopes has been replaced by a proper gondola two years ago. Soon the t-bar will be as extinct as T-Rex here around.

The region offers summer skiing at the Kaprun glacier but as Kostadinovic says, “it is not fun in winter.” At Bobbie’s pub there is an Irish rugby jersey on the wall. They like the Irish skiers who come in large numbers to the town.

Zell am Zee is a smaller resort, with just 8,000 beds but comes with a star attraction, a lake that freezes from mid January to the end of February.

It is also accessible by railway, with the Salzburg to Innsbruck line running through the heart of the town. The rail journey from Salzburg takes and hour and 15 minutes.

The slopes here offer138km of good skiing served by 53 lifts but this will be dwarfed by the prospect of a direct link to Saalbach planned for three years time, putting this up with the big linked ski areas such as Four Valleys, Les Trois Vallées, Espace Killy, Skiwelt, Paradiski, and Grandvalira. 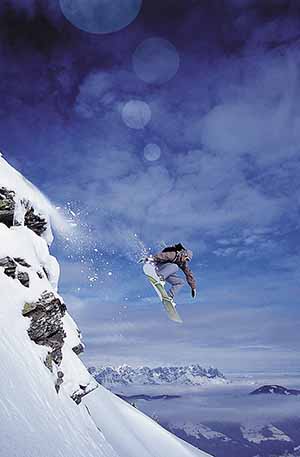 The nightlife is lively. The town has an Irish pub, O’Flanagans is the Irish pub and terrific evening dining at the famed Crazy Daisy restaurant. We adjourned afterwards for beers and bop in the Dillie, floods of dry ice spewing from the walls to interrupt the talk of the white stuff.

To discover one of three real treasures of the Eastern Alps you have to head uphill. Christian Schatzer runs Pinzgauer Hutte on a mountain spur, looking down on the valley. After lunch he will arrange to have you brought up by skidoo, a reindeer sleigh in reverse with the cart dragging skiers stopping each time a snowboarder comes undone. It is fun.

The dining on the mountain is proudly local, offering the delicacies such as Tiroler Grostl and Kaiser Schmarm alongside Anglophone imports.

On the ski down I met an amazing 72-year-old, Joaquim Temmel from Linz, who spends a week here each year. He doesn’t do wimpish tings like use the lift. He walks up the mountain and skies back down, often off piste. This year he is mourning for his dog who used to accompany him on these adventures. Sometimes he would ski waist deep as the dog pranced up and down through the powder “like a dolphin.”

Bad Gastein, as indicated by the name, was a spa town long before ski became popular and carries all the bow-tie grandeur that its status can bestow. It has a tuxedo casino (bring your passport or you won’t get in), a signature midtown waterfall whose sound thunders down the main street, and a famously lively bar, the Silver Bullet, well known to Irish repeat Gasteiners.

It fits the brochures neatly because it has more accommodation when you count the three towns, 7,000 beds in Bad Hofgastein, 5,000 in Bad Gastein and 2,500 in Dorfgastein.

Both Bad Hofgastein (Alpentherme Gastein) and Bad Gastein (the Felsemtherme) have large communal spas with fitness centres, massage treatment roooms and multiple pools, including unisex saunas where nudity is mandatory.

The best restaurant in the valley is a short drive out of town. At Bertahof restaurant we tasted the local delicacies, trout, chicken stuffed with reindeer, and a delicately prepared heifer thyroid.

If the slopes have chilled you, you can warm up among the thigh slappers at the Hirschenhutte where Astrid Schafflinger the waitress promised our vegetarian colleague a surprise. The dinner show is pricey but the communal dance afterwards gets everyone on their feet, amid much ringing of cowbells and toasts in Swedish.

It was windy when we reached the Stubnerkogel joint ski area, gondolas swinging in the breeze as we ascended 2200m to the top in seven and a half minutes.

Hans Naglmayr, who plays the long wooden Alpine horn in his spare time, is a park ranger by summer who has seen the snowline rise in his short lifetime. When the talk turns to global warming he declares, “it is twelve, not a minute before twelve, the time has come.”

After three of these resorts you understand why it matters.

Topflight uses Salzburg Airport as its gateway to all its ski resorts in Austria. The best value for ski holidays is always in mid January, but the longer days of Spring – with sunny days on the slopes – are a great alternative in March. www.topflight.ie Topflight 01 2401700 or your local Travel Agent.