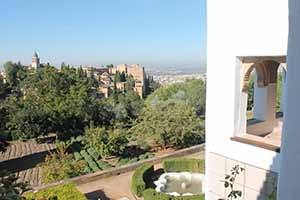 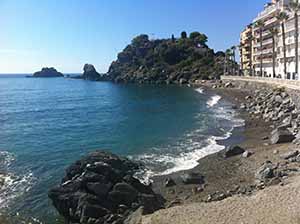 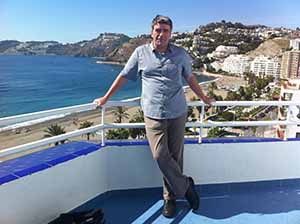 There are those that will tell you that the Sierra Nevada is best viewed over a glass of wine from the terrace bar in the Hotel del Carmen, and they might not be wrong.

They would include many of Ireland’s travel agents, who spend three days in November in the historic Andalucian city as part of their annual conference.

The high mountains affect the mood of the town and impose themselves on almost every streetscape.

It can get crowded at Granada’s signature tourist destination, the Alhambra Palace perched on the red hill of Sabika, with vast gardens that wind their way between the palaces.

Despite the tourist tsunami, you can always pick up the air of peace and refuge from the hubbub, green leaves turning yellow and the sound of water from the drains as you leave high fort and enter medina.

The tour guide Pepe Salmeron tells us about the miracle of Moorish hydrology, how the aqueducts constructed from the ninth through the 16th centuries moved water from the Sierra Nevada, inclined so that it traveled neither too fast nor too slow with the width of the conduits varying to quicken the flow in places, burling and spitting into the Hall of the Two Sisters, appearing calm, smooth and unrippled in the reflecting pools.

Nowadays 35 gardeners tend the ancient gardens. In the past it most have been more.

In the bars of Granada town, the tapas are free. Just two Spanish cities, they tell us, continue to serve tapas free with their beer and rjoca.

The city has cleaned up and pedestrianised over the past two decade, and taken to making a bigger deal out of its Moorish (and Jewish, check out the Campo del Principe in the Barrio Realejo) heritage.

In truth you can ramble anywhere in the city and find an inviting place for a drink and a chat, tiny bars and a cavernous arenas, and sometimes both at the same time.

In the late evening you can sit on Carrera de la Virgen, watching the world go by.

Another discovery was 40 minutes away: Almunecar and its sunwashed hinterland of 18 beaches is easily reached from Malaga airport, a little further to the west of the Costa Tropicale than the Irish favourite of Nerja.

The municipality has 6,500 beds offering lower prices than those to the east.

It is a delightful place, dripping in history (high rise Spanish sun resorts generally are not), Roman, Moorish and Spanish tradition leaping out from every postcard-perfect view of the town and seascape.

Felipe Puirtas conducted us on a pleasant walking tour through the town and the 800 years of homesteads uncovered at corner of the Parque el Majuelo, October sun flooding the green custard apple trees , old walls supported by steel props, roman remains juxtapositioned with a 100 year old chirimoyo tree from Peru, Jose Salado selling guitars in his cornucopia shop.

We stopped by Casa de Comidas , stepped in to buy the signature local croissants in the Confitria Mari-Trini , for caruela mohina pequena in a little shop owned by Jose Luis Hernandez and for goats cheese on outdoor tables in the little square at Los Geranios in Plaza de la Rosa.

Alicia Guerrero entertained welcomed us at the Hotel Helios, supposedly a three-star but with very four-star facilities including a rooftop bar with a view along the coast.

Eoghan Corry flew to Malaga with Aer LIngus, www.aerlingsu.com as a guest of the Spanish and Andalusian Tourist Boards. He stayed at the Hotel de Carmen, www.hotelcarmen.com/hotel-granada.php