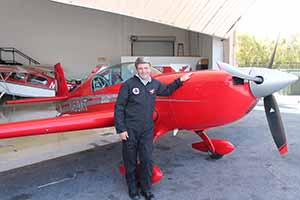 Travel Extra editor Eoghan Corry experiencing the skycombatace.com flight in Henderson, Nevada, where excursionists are allowed to take the controls of an aerobatics jet

Travel Extra editor Eoghan Corry (front) experiencing the skycombatace.com flight in Henderson, Nevada, where excursionists are allowed to take the controls of an aerobatics jet 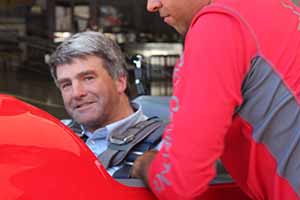 Look left said my tandem pilot, so I did.

THAT, he said, is the sight of Las Vegas upside-down.

When I signed up for the sky combat experience in Henderson, just outside Las Vegas, I was not sure what to expect.

The www.skycombatace.com publicity said that you would actually get to fly an aircraft, the equivalent of a fighter jet, an extreme roller coaster ride with you in charge. It turned out to be true.

You are shown a short training video and told how to steer this amazing beast, a German built Extra 330LCm two-seat, tandem aerobatic craft, $8m worth of hardware ready to fly at 8Gs over the red sand.

That sounded more complicated than it was.

It involved putting your hand between your legs and pulling a handle. Sounds good so far.

The pilot can override me if I do anything silly (he may have heard of the incident involving the cruiser at Meelick Lough in 2007).

Jeremy Dieringer’s instructions are direct and persuasive. “Don’t pull this handle because the canopy will eject and we may have to bail out,” presumably leaving us at the mercy of your parachute over the Nevada desert.

I want to say “why did you tell me about that handle, I didn’t even know it was there.”

He warns me not to hit the differential toebrake during takeoff or landing as you will flip the aircraft (why do they do that, once you hear you instantly want to do so).

Otherwise he reassures me I am safe: “whatever flight condition you inadvertently get into, we have plenty of altitude to recover from.”

So we take off. The heat is intense (43 in the shade this year) and the adrenaline is already being injected as fast as jet fuel.

Now, said my [pilot, you are in charge. So soon?

How do I know how high I am. He rotates the jet over and tells me to look down. That’s how.

Then he takes control and does a loop. He invited me to do it, and I do it.

He then takes control and does a roll. I do the same.

There is a whole menu to go through: cuban 8’s, hammerheads, tail slides and spins.

The real heavy duty tumble is called a lomcevak. Apparently it is Polish for hangover.

We watch one of my travel writing colleagues do similar manouvers, spaced between mine. One of his drops heart-stoppingly low.

My pilot takes over and brings me home, showing me through some contour flying, cruising at 230mph and then brings me through 4G in one manoeuvre. People have tolerance for 6Gs and women have higher tolerance.

The skycombatace.com experience allows people participate in an aerial dogfight. Apparently it is a big hit with stag parties.

Euclid never made it to Las Vegas. The straight line is never the shortest distance between two points.

The city is built for cars, not for walkers. A good starting suggestion for getting from A to B is to head off in the opposite direction.

It is an unusual city in other ways. Almost all the promotional photographs you see of Las Vegas are taken at night.

The city does exist by day (they assure you) but it is an ordinary place, good for airport transfers and a limited range of other activities.

It was June, and was too hot to step outside even if you wanted to.

Leave the air conditioned comfort and you burn.

Some of the most beautiful landscapes in the world lie just outside Las Vegas, which should be a major selling point of the city, more even than the gambling that has made the city famous.

Most people see these landscapes by Perspex tourism, looking at red boulders or layered canyons from a bus trip or helicopter ride, stop at the top, then at the bottom and fly back in the evening with Journey blasting in the ear phones. Back to Vegas of the 12,000 entertainers, eight Cirque du Soliel shows, fine dining restaurants and throbbing night clubs.

The last new mega-resort, the 10,000 bed Aria, decided not to impose itself on the cityscape.