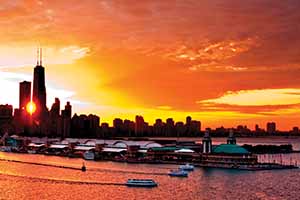 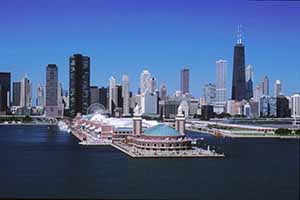 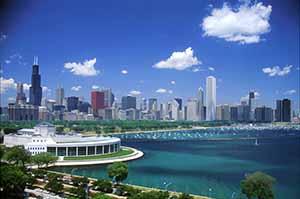 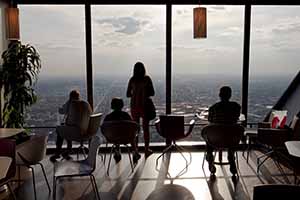 You need to go to just one city to understand the USA. Like America itself, it is a city of changing cultures and changing faces.

In Chicago you can always tell when the lake shore had decided to change the mood of the city.

When we visited Chicago was more wind-chill city than windy city Home was the Drake Hotel, a classy venue centrally located between the lakeshore and shopping-magnet Michigan Avenue – you know it is classy because there is a couch in the elevator. Room 437 had a fantastic lakeshore view. Dinner was signature mid-west steak in Benny’s Chop House.

The wind was biting but it is beautiful, a big lip of ice being pounded by the freshwater waves of Leek Michigan. Chicago knows and loves its waterfront and uses it to create a unique atmosphere. On the first morning,

At the Shedd Aquarium, Chicago’s biggest attraction with 2.6m visits a year, we are brought up close and personal with a penguin it watches us with a curious eye. Eventually it did what penguins do best, projectile poo.

A prowl around the Art Institute of Chicago (home of American Gothic, the American Mona Lisa, as our hostess Nora Gainer describes it) is followed by Chicago’s signature deep dish pizza from Lou Malnati’s Pizzeria.

In the evening things get upwardly mobile. Ascend the Hancock Tower on a clear frosty night. The view goes for more than 50 miles in each direction. We were there on one of the clearest nights that hostess Jennifer Hessler can remember.

We finished with Italian fusion from John Coletta’s Quartino Ristorante and a night of music at Buddy Guy’s Blues Club.

Go to the Wilis Tower to walk on glass. The glass deck on the 103rd floor is safe as a house, or more likely safe as a 1,451-foot tall house.

Randy Stancik first came up with the idea of a glass deck on viewing floor of the Willis Tower twelve years ago.

He didn’t tell this bosses what was happening until the designs were complete.

Since the deck was installed, visitor numbers have gone from 1.1m to 1.6m a year at Willis, formerly the Sears Tower.

Just under 20pc of these are from overseas. They have revamped the queue system, upgraded the turned the old Sears office cafeteria into a 7,500 square foot gift store, where you can buy Lego models of the towers. If you have visited the Sears, forget the old experience and come to the Willis to renew the experience.

No matter which you way you turn, there is no escaping that lake. Winter or summer, Chicago knows and cherishes its waterfront and uses it to create a unique atmosphere. It has 17 miles of beaches and in the all-too-short summer it exploits them.

According to Warren Wilkinson of Chose Chicago, “the cityscape is unique. Water has such an influence on the city it has to be encountered close-up to appreciate it.” The most beautiful great city left? Probably.

Eoghan Corry travelled to Chicago with Aer Lingus who fly direct from Dublin and Shannon. www.aerlingus.com