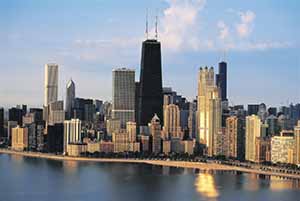 It was in Chicago, where else, that I learned of Al Capone’s contribution to world health.

Al had grown up in the poor neighbourhoods of Brooklyn, the wrong side of the tracks, before moving to Chicago, the town that invented the phrase. It was said a relative became ill and died after drinking spoilt milk.

Capone opened soup kitchens during the depression, acquired his own dairy and lobbied his client politicians, Mayo William Hale Thompson, to pass a law requiring an expiration date on milk.

When the milkman’s union objected, he had the chief kidnapped and used the $50,000 ransom paid to open his own dairy.

A man of action. 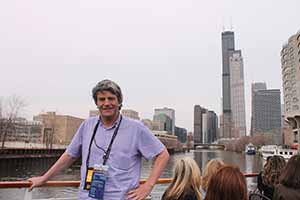 There are four people from Chicago that are well known internationally: Oprah Winfrey, Michael Jordan, Barack Obama and Al Capone. Chicago is reluctant, to put it mildly, to celebrate its gangster history. The warehouse where the Valentine’s Day massacre occurred is now a green swathe of parkland with no commemorative features. Al Capone’s house can be visited but is not promoted as a tourist attraction.

But one landmark of the history of the gangster era is definitely worth a look: the Biograph cinema outside which John Dillinger was shot. Most of the bars around here started out life as speakeasies.

Today they are landmarks on the streets of Armitage known for their Bohemian flavour and birthplace of icons of Chicago hospitality such as Charlie Trotter’s restaurant.

Away from the neck-ache city centre sunblock skyscrapers, this is as good place as any to explore and get under the skin of Chicago.

Access is easy form the city centre loop line. If the best place to see Chicago it’s from its water courses, the loop line comes a close second.

Some of the stations have been restored in all their period splendour to give a flavour of what it was like to live in the city when this was the most happening place in the world, its population bulging and doublng every 10 years with immigrants, wave after wave of them changing the character and pace of the city every few years.

The Irish were amongst them, infatuated with how much money could be made and how lives could be transformed emotionally and psychologically as much as by the freezing winter temperatures. The brother of an uncle of mine, Donal Campbell, once told me when he went to Chicago from Clare as a young man he could pit and hear the clunk of the ice as it hit the ground.

To experience the soul of the city seek exactly that, the music. The blues clubs of the city centre places like Blue Chicago are as genuine and authentic as Vegas is fake. 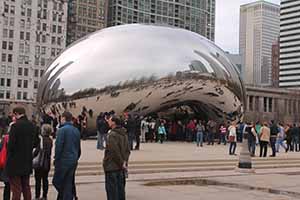 Chicago city centre is walkable. Whoever designed the urban transport could not be accused of joined up thinking. The Metra lines do not meet.

The bus system is effective but only if you travel to essential points. Getting from suburb to suburb, even from attraction to attraction, requires meticulous planning and, more often than not, departing public transport to get a taxi.

To understand Chicago, take to the water. The river whose course was reversed is one of the first great engineering marvels of a city which still celebrates its engineers and architects. The architecture tour, appropriately, things place on a boat because this is the best position from which to view the towering structures of shining glass and collision between mid century modernism art deco and millennial flamboyance that erupts around you as you travel from block to block, bridge to bridge, through the watery artery of the city.

Chicago no longer builds the great skyscrapers of the world in their own city.

The Willis Tower, formerly the Sears Tower, and the Hancock building, one of the most iconic built structures in the world, will not be supra seed by anything higher in the immediate future.

But that does not stop Chicago. The towering buildings of Taiwan, Dubai, and potentially, Saudi Arabia, are designed and connived here in the heart of American architectural culture. Look up, it is Chicago.

On our night visit to Blue Chicago one of the audience members was invited to take the microphone with sophisticated and suave set that would take the breath away of the most cynical tourist.

Chicago is still a hard drinking city, perhaps a relic of some of those extreme waves from beer swilling north Europe. it is a good place to party and tan easy place to find convivial conversation over a few beers. What more could anyone want on a trip to a foreign city?