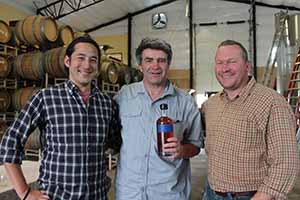 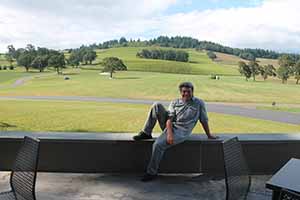 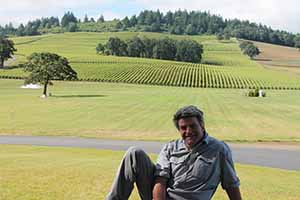 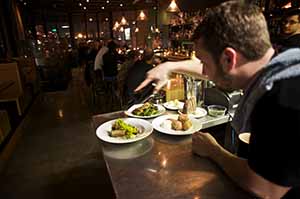 Spirits at Beaker and Flask Portland, OR
Travel Portland project 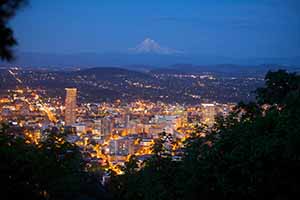 Portland Oregon with Mt. Hood in the distance. Photo by Jamie Francis 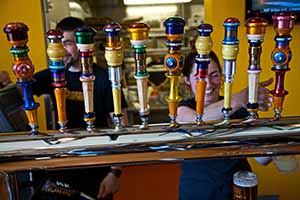 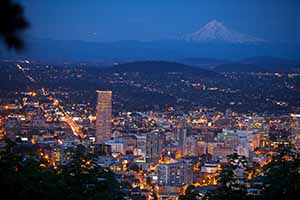 Big Pink and downtown Portland, Oregon with Mount Hood in the distance. 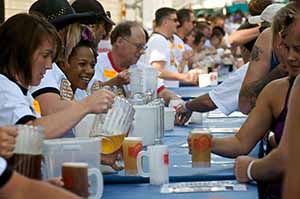 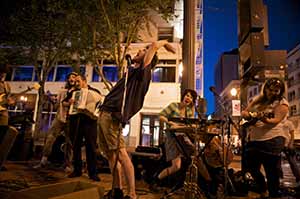 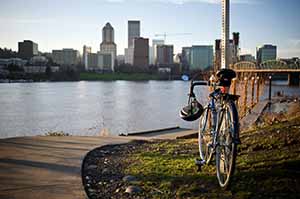 Portland’s waterfront, east side of the river along the Esplanade. People enjoying unseasonably warm and sunny weather in January. 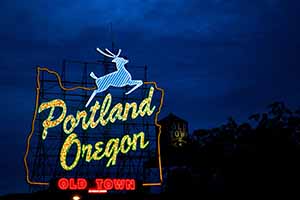 The White Stag sign at the west end of The Burnside Bridge has been a fixture of the city since 1940. Photo by Jamie Francis 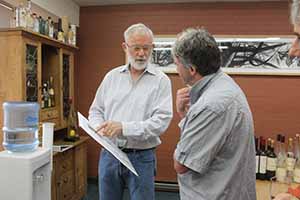 When the Pacific rolls into the USA, bringing its vapours and rain, it meets Oregon.

Great collisions like that affect both landscape and people. The mountains were covered with rich forest, promulgating both the logging boom on which the state was founded and the rich farmlands on which it now sustains itself, but also affecting the people who settled here.

Portland is the heart of counter-culture. Only those who have never been to Portland can say San Francisco is the most European of cities. Want to see the USA’s biggest bookshop? Yup, Portland.

I was there because Tad Seestedt of Ransom Distillery was launching his virtual Irish whiskey in Sheridan Oregon, put together from an 1865 mash bill that he uncovered. He has mixed in oats for the occasion.

Oregon is the Ireland of USA, I tell him. It rains on cue. “May your climate never change,” is the toast.

Tad is an enthusiast, who believes when it comes to distilling that cooperage and proofing are not talked about enough. He makes terrific grappa, but the Americans don’t drink much grappa either.

Oregonians, in contrast to the commonly held perception of Americans in general, have a great sense of irony. Andrew Volstead, the congressman who managed to get prohibition on to the statue books in 1919, has had a vodka named here in his honour.

This news deserved further investigation so I head to Portland to do some imbibeful research. A pedal-taxi comes to the wonderfully eccentric crystal hotel, owned by the McMenamin Brothers. “We are the Clydesdales of the cycling community,” my guide Matthew Cruz tells me.

His job is to bring me to distiller Stephen McCarthy, a fifth generation Corkman who has spent his life trying to introduce Americans to the pleasures his Eau de Vie. Americans don’t like Eau de Vie much, but Stephan doesn’t mind. He distils lots of other things as well.

From a standing start, the still Stephen bought in Germany in 1985, the Oregon whiskey movement has gained pace and now there are 35 craft distilleries in the state and 15 more on the way, many within Portland itself. Stephen has a unique Douglas Fir liquor, but I found it an acquired tastes.

A visit to Ireland inspired Stephen to make a single malt whiskey called McCarthy’s, rated by whiskey writer Jim Murray as one of the best in the world, of which he has a limited edition he finds a bottle for us to taste.

His is the first of four distilleries I visit, Patrick Bernards’ Bull Run Distilling (one of their rums is known as Temperance), Andrew Tice’s House Spirits of the better-known Aviation vodka (where they named a vodka named after Temperance pioneer Andrew Volstead), and Eastside Distilling, best known for Marionberry Whiskey, with lunch in between at the lunch at Michael and Sasha Cyril’s at Clay Pigeon, a sanctuary of wine and cheese.

Brandon Wise, the president of the Oregon Bartender’s Guild no less, (“my name is a bit of an oxymoron” is his opening line) serves me a selection of his best in the Imperial, an impressive new bar with chandeliers made from bicycle chains. He sees his role as a cultural one, to “help people engage history of drinking.” He says prohibition created the cocktail, because the alcohol available was of such mixed quality, and that prohibition cocktails are being resurrected al the time.

He says Oregon produces great Pacific rum for mixing. The cocktails have creative names as well: “A radish walks into a bar,” “Sleight of Hand,” “East of Eden,” “Exit through the gift shop.” He also has two cocktails on draught, Vieux Carre (based on rye, brandy, vermouth, Benedictine, angostura and Peychaud’s bitters from Kentucky), and another called Attention c1930 based on gin, vermouth, crème de voilette and whiskey.

Brandon creates new rhythms like a DJ mixes music. “It is a lot more like baking than it is like cooking. The better the ingredients the better the product. That flavour arc can absolutely affect your mood.” At 2am it is difficult to argue with that.

After my whiskey day, what better to clear the head than a wine day? So I head up to Beverly Cleary country in McMinnville.

Wine tasting has moved on from the days of a pokey cellar door smelling of stale yeast. Today’s American wine Taste-Mahals are like automobile showrooms, all trendy architecture and glass fronts, a regulated cover charge of $15 or $20 a flight of six tastes and an exit through the gift shop.

Where Napa and Sonoma have gone, Oregon is following.

Seven of the Oregon wineries have new tasting or show rooms and I stop by at five of them.

Laurel Dent welcomes me to a pioneer vineyard, Ponzi, where they developed their own pinot noir clones with the help of the University and ushered the Oregon wine industry into life in the 1970s. The trail leads on a well-lubricated path, to a lunch in the five star spa resort Allison Inn, to other new tasting room showrooms at Sokol-Blosser and Stoller, and a chance meeting with Brian O’Donnell, first generation from Scarrif, whose Belle Pente pinot noir is among the best in the state, and Trish Rogers from Louth who markets Stuart’s wines.

The night is punctuated with a terrific steak in McMinnville’s best restaurant, Thistle, drinks in the rooftop bar in McMenamin’s Oregon hotel and a big finish with beers and a session on the pool table in the De Luxe Bar. If Ireland had a wineland, it would be like McMinnville.