Trending
You are at:Home»Travelextras»Double win for Kelly’s Resort and Ashford Castle at Hotel and Catering Review awards

More than 450 members of the hospitality industry were at the awards, in association with Hotel & Catering Review, which took place at a black-tie awards ceremony in the Lyrath Estate Hotel in Kilkenny and were hosted by TV3’s Martin King. 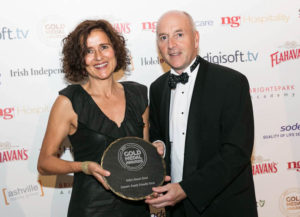 The Outstanding Service Award, chosen by the Gold Medal Award’s judging panel recognises and honours an individual’s outstanding contribution to the hospitality industry over a significant period of time and the honour this year was presented to Aidan Moynihan of Hotel Killarney.

Judge Sybil Mulcahy said: “The calibre of entries this year was incredible and we are delighted to see such a strong offering in our hospitality industry – it bodes extremely well for the tourism sector and for our economy as a whole.” Pictures from the night can be found here. The awards are in their 29th year and the details of winners can be found here.