The ceremony, held at City Hall in Dublin, named 77 hotels, tours and attractions in all. The shortlists were based on feedback from 32,000 inbound tourists. The bar was set high for competitors – each had to achieve at least a 92pc satisfaction rating in the survey. 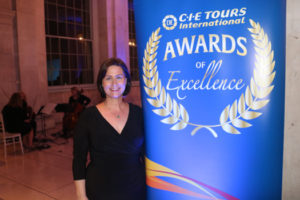 Elizabeth Crabill told Travel Extra at the event: “2018 was a really strong year for CIE Tours but also for Irish tourism in general. We [CIE Tours] reached a record of €120m in revenue, which is a 13pc growth on the year before. That was really great for us but also for our partners who are here tonight getting their awards.

“The annual awards ceremony is really recognising those that have the highest customer satisfaction rating but also were some of the largest producers for our tours as well, so 2018 has been a very strong year and we’re expecting 2019 to be another growth year.”

While new routes have been added from Asia, the core business is still from across the Atlantic, with greater connectivity playing a huge role, she said. “We’re testing the Asia market, but it’s a test; we consider it to be in its infancy right now.

“It’s mostly north America but also Australia, which is up for us this year, but north America between the US and Canada is where we saw the biggest growth. Aer Lingus has expanded admirably and they are giving us more and more ways to get people directly into Dublin, which is what we need.”

Ms Crabill added that it’s looking to grow the Canadian market, and also increase staff numbers from the present three in that market segment.

On the issues facing the industry, including the jump in hospitality VAT from 9pc to 13,5pc, she said: “I think the VAT is a challenge across the board for everyone in Ireland, so whether it’s for us, it’s the same for everyone.” She said “once that spike is absorbed, we’re going to have to move on, but it is unfortunate.” Potentially of more concern are geopolitical factors, including Brexit, she said.

CIE Tours International itself is celebrating 87 years in business this year, and employs 140 between its offices in Dublin, London and New Jersey.