Dublin Airport is telling the history of some of the most famous Irish surnames – using images of seven real-life people with those names.
This exhibition, which is called ‘All in a Name’, is on display at the South Gates boarding area and describes some of the history associated with their popular surnames dating back to the 15th and 16th centuries. The myths and legends linked to the O’Donnell’s of Donegal, the Byrne’s of Dublin, the O’Carroll’s in Tipperary, the Kelly’s in Galway, the McCarthy’s in Kerry, Burke’s of Mayo and Murphy’s in Wexford are presented. 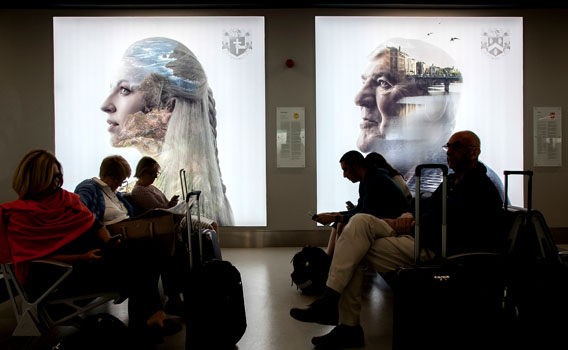 Niamh O’Donnell and Barry Byrne in Dublin Airport’s ‘All in a Name’ exhibition at the South Gates boarding area.

“Dublin Airport provides the first welcome and last goodbye to the island of Ireland for tens of millions of people every year,” said Dublin Airport Managing Director Vincent Harrison.
“It is estimated that up to 80 million people around the world have Irish surnames, however the myths and legends associated with them are not known. This exhibition at the South Gates provides passengers with a unique opportunity to experience another dimension to our rich history and create a lasting impression of Ireland for departing passengers,” he added.
The exhibition is one of seven installations throughout both terminals which form part of Dublin Airport’s Sense of Place Visual Environment Project.  The purpose of the project is to present passengers with a sense of Ireland’s culture and history.
The exhibition concept and art direction was collaborated by Brighter than the Sun, Image Now and Dublin Airport.  Participants were photographed by Trevor Hart while historians Fiona Fitzsimons and Paul McCotter-Eneclann compiled the surname history.
Other installations in the ‘Sense of Place’ series include Vibrant Irish Light, a spectrum of rainbow colours located between Terminals 1 and 2; the ‘Irish Wildlife’ exhibit in the bus lounges in Pier 2 details the wildlife featured in Irish mythology and wildlife; a taste of the life and works of Brendan Behan and Eileen Gray in mural form in Pier 2; and the story of the Southern Cross – the first aircraft to successfully fly east to west across the Atlantic that took off from Portmarnock Beach in 1939.