Trending
You are at:Home»Aviation»Dublin Airport looks set to finally get rail link – but we'll have to wait until at least 2027

The National Transport Authority and Transport Infrastructure Ireland have announced details of the emerging preferred route for MetroLink, the rail service that will run from Estuary north of Swords to the Sandyford on the southside, serving Dublin Airport and the City Centre. It’s only a preferred route, and the final decision will be made after consultations with residents.
Public consultation on the project gets under way immediately with MetroLink scheduled to be operational in 2027.
Both Aer Lingus Communications Director Declan Kearney and Dublin Airport Managing Director Vincent Harrison told this week’s Irish Tourism Industry Confederation event that a rail link is key for an airport serving 30m passengers a year. The view was that not only is it important for passengers, but also for airline and airport staff, many of whom live in the Swords area.
The Transport Strategy for the Greater Dublin Area (2016-2035) envisaged a rail link from the south city centre to Swords. It also envisaged the upgrading of Luas Green Line to metro standard, which would link up to the metro services running north to the airport and beyond, to provide Dublin with “a high capacity, high-frequency cross-city rail corridor”.
Now, under the National Development Plan 2018-2017, Metro North and Metro South will now proceed as one project known as MetroLink.
Consultation on the project commences next week with information evenings organised for areas such as Swords, Ballymun, Dublin City, Glasnevin, Ranelagh and Leopardstown. 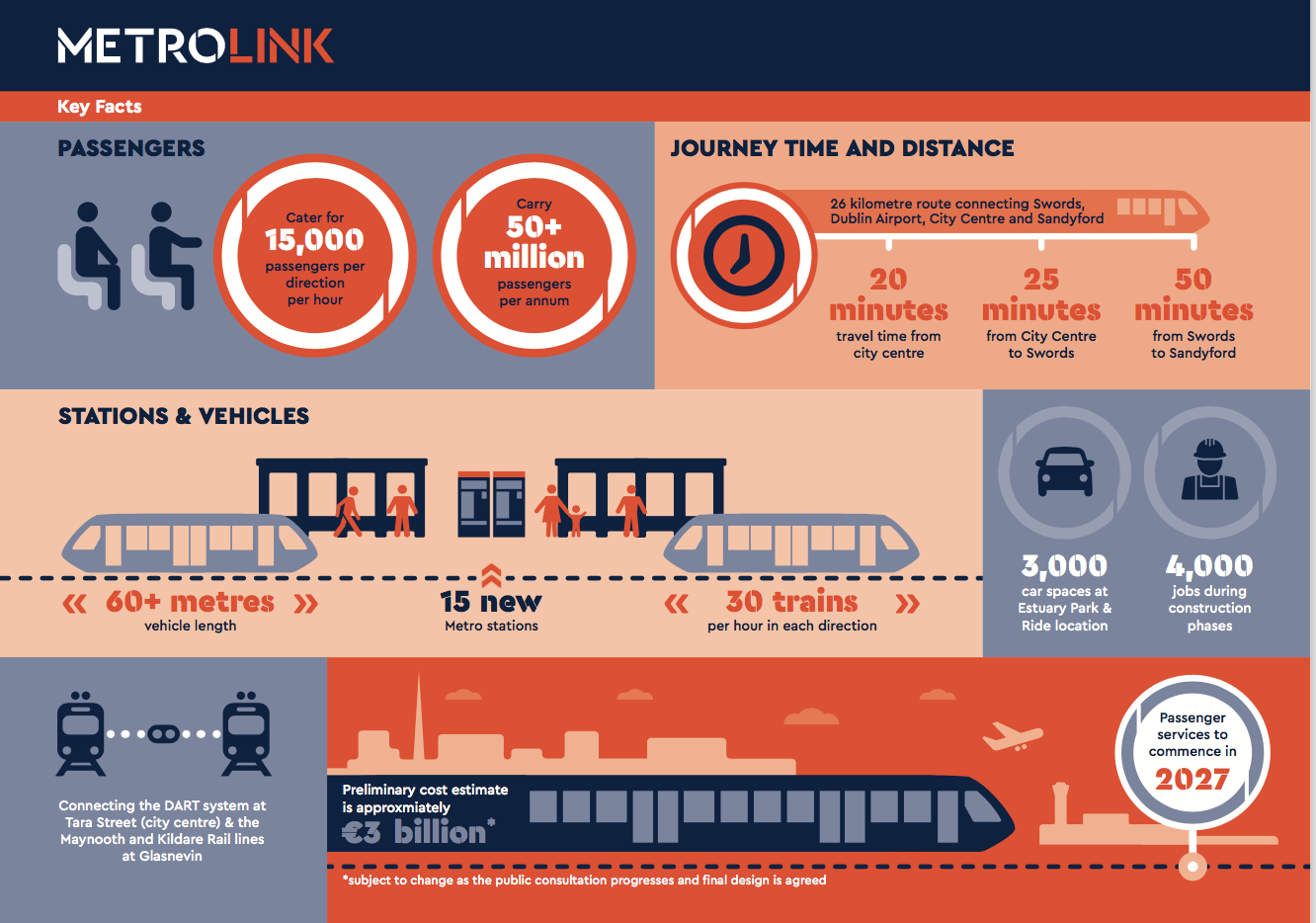 National Transport Authority CEO Anne Graham said: “There are very significant benefits associated with MetroLink, particularly in terms of the integrated transport system that it will bring about for Dublin. For example, thanks to MetroLink, there will finally be a rail link to Dublin Airport, and with easy interchange with other modes including bus, Dart and commuter rail, MetroLink will make it easier than ever to move into and around the capital.
“There will be 25 stations in total, 15 of them brand new, so it will also make sustainable transport a viable option for more and more people in areas like Swords and Ballymun. We have modelled future passenger numbers and we predict that capacity for 15,000 passengers per direction per hour during the busiest peak times will be required along this corridor. We don’t believe that a bus system or a standard Luas line would be able to accommodate that number of passengers and that is why MetroLink makes so much sense.”
She added: “MetroLink will have the capacity for 30 trains per hour in each direction, so there is no doubt that it will greatly enhance the public transport offering in Dublin. In addition, we envisage the creation of about 4,000 jobs during construction, which is very significant for the economy in the region.”
Transport Infrastructure Ireland CEO Michael Nolan said: “Really what today is all about is the launch of the consultation process for MetroLink, because we want to make sure that people at local level have a say. What we are publishing here is the ‘Emerging Preferred Route’, rather than the final route. Having examined in detail the various alignments and options, the EPR is the one that we feel is the best fit for the project. But we remain open to looking at other proposals, and if people or communities feel there are better ways of doing it, we will of course be happy to consider any alternatives put forward.”