Trending
You are at:Home»Aviation»Dublin routes are best performing in both Britain and Ireland, says new Air France-KLM boss

Ms Duval, who succeeds Warner Rootliep in the job, said load factors are running at about 87pc in the first nine months of the year. “The past 18 months the curve, following the economic recovery in Ireland, has been up,” she told Travel Extra during a meet-and-greet trip to Dublin.

Air France is to change from CityJet codeshare only to a mix of Air France A318s (twice daily), a Hop Embraer 190 (daily) and CityJet Avroliner AR8 (daily) on the Dublin-CDG route begin operating its own aircraft on the Dublin to Paris Charles De Gaulle route from October 29.

As revealed by Travel Extra, KLM will go to five daily using Boeing 737 aircraft and Embraer 190s on the Dublin-Amsterdam route from October 29. Despite more competition looming in the transatlantic sector, with Aer Lingus aiming to make Dublin an even more important hub, Air France-KLM sees room for further expansion of its services in Dublin, but has ruled out introducing its millennial-focused airline, Joon, for now.

Ms Duval said 29pc of the Irish traffic is point-to-point to Amsterdam – 42pc is long haul and the remainder medium haul in Europe. The big onwards destinations are Beijing, Shanghai and the United States. With Paris, 54pc of the traffic is to France, with just 8pc going long haul. 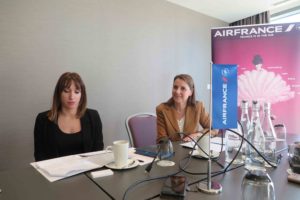 “With Charles De Gaulle, we knew we were lagging behind,” she said, adding that paths for customs, etc, “may be complicated, so we’re making them easier”.

CDG is copying the more successful Schiphol, she said, “using the same signage as Schiphol,  which is also translated in Chinese and Japanese”.

On the trade, she said 85pc of bookings are through agents, “and we still want to work with the trade, no doubt”. But online booking is an important tool as well, and said “if we can increase the cake, it’s perfect”.

While saying that GDS is a “costly channel”, she said “I don’t think the days of GDS are gone” but also said Air France-KLM “are looking at what Lufthansa do and BA do”, with its rivals charging, or about to charge, fees for GDS bookings.