Trending
You are at:Home»Aviation»Dublin was the 11th busiest airport in the European Union last year 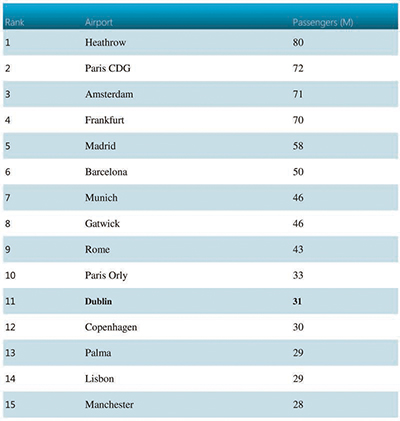 Frankfurt achieved the highest growth among the major airports (up 7.8pc), with 69.51m passengers. The soon-to-close Istanbul-Atatürk posted the second best performance (6.4pc), with 68.19m passengers).

Paris-CDG was up 4pc, with 72.22m, but strikes at the home-based network carrier took their toll, while  capacity constraints more than halved growth at Amsterdam-Schiphol (3.7pc compared to 7.7pc in 2017), with 71.05m passengers, and also limited gains at Heathrow (up 2.7pc), which remained the busiest airport in Europe, with 80.12m passengers.

Dublin Airport Managing Director Vincent Harrison said: “Dublin Airport has grown in recent to become a significant player in the European aviation market. This added scale is good news for the economy throughout the island, as it enables Dublin Airport to compete at a higher level with other major airports to win new business and boost Ireland’s overall connectivity.”

ACI Europe said that EU passenger growth was affected by air traffic disruptions, airline strikes and some consolidation activity during the summer, but that growth had improved during the winter.

Airports in eastern and southern parts of the EU had the best passenger performance last year, along with those in Austria and Luxembourg. The weakest performing countries were Sweden, which has a new aviation tax, and Britain, where fears in relation to Brexit had an impact, according to ACI.