Trending
You are at:Home»Ireland inbound»Ed Sheeran and Dermot O'Leary to promote tourism to Ireland this autumn

Singer Ed Sheeran and TV presenter Dermot O’Leary are to promote Ireland in a campaign for Tourism Ireland this autumn.
In the video, filmed at the London Irish Centre, O’Leary, born in London to Irish parents, asks Sheeran about touring in this country. He reveals that Dingle is his favourite place, but if he had to choose a place to live, it would be Co Wexford. He also says that while Dublin audiences are renowned, his best gig here was in Cork – because it the was to be held at the new Páirc Uí Chaoimh stadium. 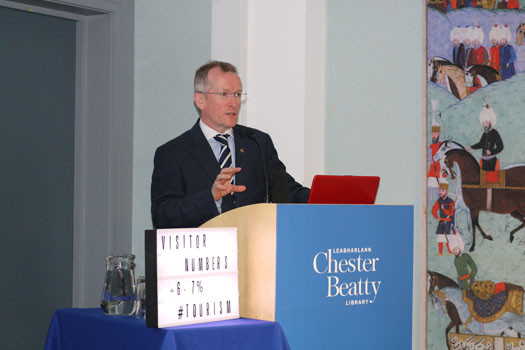 The new video was revealed by Tourism Ireland CEO Niall Gibbons as he briefed the media in Dublin on the organisation’s mid-year performance.
See also  Sligo Park Hotel becomes No.1 Sligo hotel on TripAdvisor

Overall inbound numbers are up 6.7pc, and Mr Gibbons said the country is on track to meet its targets for the year of 10m visitors and €6bn revenue.

“We have seen an excellent performance so far from North America – up 10.7pc on the first half in 2017, making it another record year. Ireland now welcomes 10pc of all American visitors to Europe – particularly noteworthy given the intense competition from other destinations. It has also been the best ever first-half performance from Mainland Europe (10.2pc), with important markets like Germany, Italy and the Nordic Region all recording really good growth,” he said.

But there was caution in the air, with Tourism Minister Shane Ross saying that 80pc of all bed nights are in five counties, while Mr Gibbons added: “While we very much welcome this first-half performance, we are certainly not complacent and are aware of the need to address certain challenges to sustain growth into the future. The impact of Brexit on outbound travel from Britain remains a concern.

“The fall in the value of sterling has made holidays and short breaks here more expensive for British visitors and has made Britain more affordable for visitors from many of our top markets. Ireland needs to be seen as offering an excellent value-for-money holiday experience, so competitiveness and value for money remain more important than ever in Britain.”

Meanwhile, Tourism Ireland Chairman Joan O’Shaughnessy made a plea to Mr Ross for the funding required to maintain the tourism boom.