Trending
You are at:Home»Travelextras»Emirates passenger numbers up 2pc to 442,000 on Dublin route

The airline, which launched operations from Dublin on January 9, 2012, also flew 223,342 people flew from Dublin to Dubai and onwards to destinations including Australia, New Zealand, South Africa, Thailand, Vietnam and Japan, which are among Emirates’ most popular destinations for passengers travelling from Dublin Airport.

Enda Corneille, Emirates Country Manager for Ireland, said: “We carried more than 219,000 passengers into Ireland from around the world, via Dubai and this figure includes international tourists, business passengers and of course, those returning from holiday.” 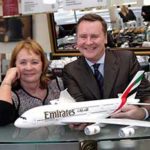 Country manager for Emirates in Ireland Enda Corneille, and the Chairman of Butlers Chocolates, Mairead Sorensen

Emirates is currently operating operates Boeing 777s on the route, each of which can carry 360 passengers and 25 tonnes of cargo.

Almost 10,000 tonnes of Irish exports were carried by Emirates in 2018 by SkyCargo, its freight division with a dedicated team at Dublin Airport.  Just over a third (35pc) of Irish cargo was made up of food items such as crabs, oysters, razor shells and salmon, much of which was carried to the Far East and specifically, Hong Kong, Shanghai and Singapore.

Other Irish produce making its way to the supermarkets of Dubai and onwards to Asia include yogurts, cheese, beef, chocolates and baby milk formula.

Pharmaceuticals accounted for more than 2,000 tonnes of cargo carried by Emirates SkyCargo from Dublin last year to end markets including Australia, India and the Middle East.

“One of the most popular meals on the Dublin to Dubai route is the Beef Fillet, which is served in both First and Business Class. The signature dish is served with a range of sautéed vegetables, all of which are sourced from local Irish suppliers,” Mr Corneille said.

“When it comes to our onboard wines, we see a lot of Irish customers opting for a French red, such as a robust Bordeaux and New Zealand Sauvignon Blanc is particularly popular.” Emirates has its own wine cellar in Burgundy, where 7m bottles are stored. An estimated 5.5 million bottles of wine and Champagne were consumed onboard in 2018, with Emirates investing more than €616m on its wine programme since 2006.

See also  The Holiday Show in association with Shannon Airport returns for its first show in three years, and brings expert travel advice to Limerick
The following two tabs change content below.