Trending
You are at:Home»Aviation»Everest Irishman John Burke returns to hero’s welcome at Shannon

Everest mountaineer John Burke is still on cloud nine and has returned to a hero’s welcome at Shannon Airport. He dedicated his adventure to his wife Aoibhín and the cause the couple have championed – encouraging young people through personal challenges.

Just six days after he became the first Clare man to reach the summit, the 38-year-old said that he would never have achieved his goal without his wife’s encouragement and support. The proprietor of one of the Wild Atlantic Way’s best known hotels, the Armada Hotel in Spanish Point, and Aoibhín established a charity, Elevate, to promote wellbeing among young people and encourage them to reach their potential.

“I owe everything to my wife Aoibhín for supporting me on this as it was a huge sacrifice for her to make and suffice to say that her gift of golf clubs is a hint that’s not lost on me,” John said at Shannon. “Growing up I didn’t achieve in GAA like others did and GAA was the only real thing back then for us in West Clare. But I have proved in doing this that here’s something for everyone.

“Young people, in particular, really need to believe in that because right now they are probably more challenged than ever.  Research has shown that one in five young Irish adults between the ages of 19 and 24 and one in six young people between 11 and 13 have mental health issues. 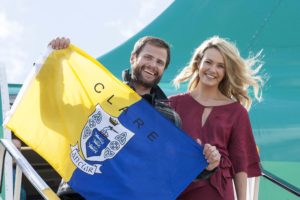 “There’s a variety of reasons for that but certainly social media is one of them. Social media is a magnificent platform for getting positive news out but it can destroy young people in an instant, especially those going through a difficult stage.  We really need to tackle that and it’s a big question but something has to be done.

“As a family we had our own tragedy with a mental health issue and that has spurred Aoibhín and I to establish Elevate.  We’re not going to change the world with it but it’s our contribution and climbing Everest has given us a platform to raise awareness in Clare about this issue.”

John was greeted on arrival at Shannon by over 200 supporters from across Clare, with buses having left the Armada Hotel and Doolin, where he is a co-owner of the popular Hotel Doolin.

He flew back to Shannon from Kathmandu via Abu Dhabi and Heathrow, landing in Shannon with Aer Lingus. His wife Aoibhín joined him on board the aircraft briefly for a special reunion, with the star of Dancing With The Stars and actress having travelled out to basecamp (5,300m) but returned home as he began his climb.

Minister of State at the Department of Jobs Innovation and Enterprise Pat Breen, family friend Deputy Timmy Dooley and Shannon Group CEO Matthew Thomas were among the official welcoming party.