Qatar Airways’ CEO Akbar Al Baker has revealed his admiration for Ryanair boss Michael O’Leary and wouldn’t rule out a deal that would see the Irish carrier feeding passengers onto his long haul services.

Ryanair is currently in negotiations with Aer Lingus, among other airlines, including Norwegian, to transfer its passengers from short haul European flights onto transatlantic services. Al Baker’s Qatar Airways is the biggest shareholder in IAG, the parent company of Aer Lingus, with a 20pc stake. 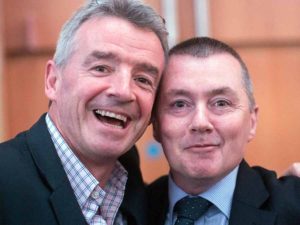 Michael O’Leary and Willie Walsh, head of IAG, in which Qatar Airways has a 20pc stake

In an exclusive interview with Travel Extra, Mr Al Baker said: “I admire him [O’Leary] very much. Unfortunately we couldn’t do business because they are an LCC [low-cost carrier] and we are a full-service airline but if there is an opportunity for me to work with any LCC I would like to work with him.

“We would with pleasure do it with them and of course he is a good friend of Willie [Walsh] and I am the biggest shareholder in Willie’s company so I think the only opportunity or the way to do business is with Qatar Airways.”

Unusually, the two have never crossed paths on the conference circuit, but Al Baker added: “I would love to meet him.”

He added that Dublin, like other routes, was always a gamble. “When you look at the route studies your planning people will always give you the worst scenario because they want to quite frankly protect their ass. What me as a CEO has to decide is am I going to take a risk or am I not going to take a risk. I’m always prone to taking risks – I’d rather take risks and two out of 10 go wrong, but eight have gone right. They always discourage me from growing so rapidly but I’m an entrepreneur, I like to be aggressive in my business plans.”