Trending
You are at:Home»Ireland inbound»Fáilte Ireland enlists the help of Boyzone and Westlife stars to promote country in London

Boyzone’s Keith Duffy and former Westlife singer Brian McFadden were playing the role of ambassadors for their country as the Dublin Convention Bureau of Fáilte Ireland targeted new business from Britain. 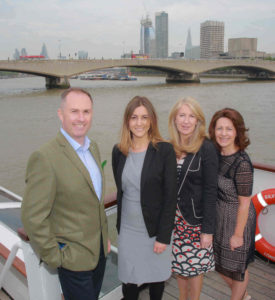 The stars were part of the Irish delegation at the “Meet Dublin in London” event where over 300 British meetings and events buyers got to meet directly with Irish hoteliers, business meeting venues and conference organisers to generate new business for the conference and meetings sector in Dublin.

Ciara Gallagher, Fáilte Ireland’s Head of Business Tourism, said: “Now an annual fixture on the business tourism calendar, this year’s “Meet Dublin in London” event has attracted its largest attendance ever – proving that, despite Brexit, there is still great British interest in our Irish business venues.  With potential business worth €52m to pitch for, our 50 Dublin trade were on hand to showcase the world class facilities that the city can offer business delegates.”

The pitching to top British buyers took place on the Silver Sturgeon boat located on the River Thames at a tailored event which will include an informal networking evening hosted by the Irish celebrities.