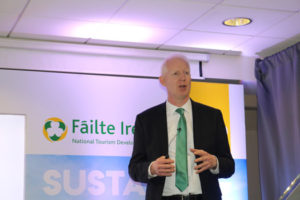 The head of Fáilte Ireland, Paul Kelly, warned, in its annual report, the attractiveness of Ireland as a holiday destination could be damaged unless a regional imbalance in the tourism industry is addressed.

“If we cannot ensure a greater regional spread of tourism activity, the sector’s potential for generating revenue and jobs will remain untapped in many parts of Ireland where there is capacity for more tourism growth and a need for job creation,” he said.

He said spreading tourists across all regions of the country and extending the tourism season to allow businesses remain open for longer was the key driver of Fáilte Ireland’s work and strategy.

The national tourism development authority has welcomed as “a major vote of confidence” the Government’s announcement of €16.3m in funding for four tourism-focused projects as part of its wider rural regeneration and development fund.