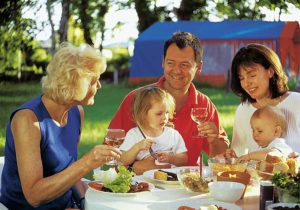 Our first tourists were campers. They didn’t drive motor homes, but all those pilgrims from the time that St Patrick went to Gaul were seafarers and tents and poles men. Things didn’t change much for about 15 centuries afterwards. But in the last five years they have changed dramatically.

Campsite managers date it to mid-1997, the great turning point in our Augusts abroad when the majority of French camping holidaymakers rejected pc (poles and canvas) and opted for caravans for the first time.

The Irish have proved more adept than most at picking out luxury. They like the bigger three and four star mobile homes, and have made themselves a very popular community on the campsites of Europe.

Not just the canvas and the shooting-gallery toilets of the 1970s have been rejected by today’s pampered campers. The showpiece hotels-pleinaries in the brochures come complete with play areas, indoor and outdoor pools and waterslides. And with children more resilient nowadays, distance no longer matters.

The combination of spirit of adventure, the euro, the rise of fly drive camping, and the Irish summer brought Irish tourists flocking to the furthest regions of France, to North Spain, Lake Garda and the cluster of seven campsites across the laguna from the ancient city of Venice.

In the midst of the “been there” culture, Venice remains one of those very special attractions. Ryanair flights to Treviso, about an hour by car from camping central, are possible through Stansted with the usual caveats of point to point travel (miss the connection and Ryanair say it is YOUR fault, even if their flight was late landing).

Cheap flights have changed the nature of the business. Taking the car by ferry is no longer the only option or even the main option with Irish campsite operators. Nicola Flood of Eurosites says that 40pc of Irish customers now book accommodation only through the company.

The more traditional destinations have also become more user friendly. At other end of the spectrum, the option of a short drive from the ferry is highly appealing to those with squawky children in the back of the car. Britanny can be weathersome, and the Vendee seems to have a huge capacity for the Irish visitor.

The combined effect of the short drive (allow six hours) from Roscoff or Cherbourg and the choice means that in late July in the Vendee has tqueues of Irish cars.

Don’t let this deter you, because the Vendee, like many touristy areas, keeps its crowds on the coastline. A few kilometres inland and you reach old chateaux like Commequiers where it is easy to imagine the sieges of the hundred years war,

The quad bike tracks on the coast are inviting, but our suspicions were aroused by the fact that the tractor on the farmhouse next door had no roll-bar. Sure enough, five year old Siofra turned her quad bike over on herself and ended up at Monsieur le Medicin.

The coastline has a rhythm of their own: tourism drives the entire region and a healthy mix of French people, with German and English, fill the campsites.

High season is August, but in September, the Eu12 menus have dropped to euro9, the resorts are clear and the roads quiet, temperatures are still high enough to enjoy a swim and the previously inundated restaurants have places. In October things begin to close, but France in September is camping’s best kept secret.

The campsite too has a rhythm of its own: the procession of anxious father on bicyclettes trying to retrieve sons and daughters from the teenage social milieu. The bouncing music from the bar cabaret acts and the bubble of little groups conversing in six languages around their picnic tables. The chirrup-cheeps of the crickets in the evening, the hubbub of the boules players, their game continued unto the early hours under Peugeot headlights.

Caravans come in two varieties, old and new, and on arrival, the trick is spotting the vintage variety and complaining loudly until you are moved.

And a tip: suncream is nourishing food for insects. Mosquitoes. Say no more.