When the first cut price airline ran to England in 1986, the days of the Ferry companies seemed numbered. Mass travel by ship across the Irish Sea was about to be consigned to memory, like steam railway and crank-start cars.

The prophets of doom had a point. Air fares to London were £240 at a time when £80 a week was a decent wage and you could buy your ship and rail ticket for £84.  Sail tickets were expensive but there was no shortage of takers.

The tradition of sailing the stormy channel to England had scarcely changed in the 200 years since Swift cursed his wait for a favourable wind in Holyhead.

Twenty years earlier the British and Irish Steam Packet Company, controlled from Liverpool by Coastline, used to dock in Birkenhead to offload the cattle before proceeding onward with passengers. It was an unpleasant trip, hell on a stormy night, but everyone travelled by boat because the alternative was just too expensive. When the Larne-bound Princess Victoria sank off Co Down fifty years ago last month, the Minister for Finance in the Stormont Government was among those who died.

Dublin was regarded as a particularly tricky harbour. When His Majesty’s packet, the Prince of Wales went down in Dublin Bay in 1807, the city walls’ fish were well and truly fried and after a brief experiment with Howth, Dun Laoghaire gained the mail packet service in 1826, and has held tit to this day. By 1835 when the railway to Dublin was opened there were six mails a day and precious little changed for 130 years on the service. Railway companies opted for the shortest sea crossing, and ran the routes to tie in with their services.

The passengers of a generation ago had a choice of five routes, Larne to Stranraer, Greenore to Liverpool with LMS (London Midland and Scottish), North Wall to Liverpool with the City of Dublin Steam Packet company, Dun Laoghaire to Holyhead and Rosslare to Fishguard with Great Western.

Generations of Leinsters and Munster sailed to Liverpool for the B&I Steam Packet Company, generations of Hibernia and Cambria mail boats to Holyhead for LMS, and generations of St Andrew’s and St David’s from Rosslare to Fishguard. In 1948 the British Government privatised their railways and had taken over their subsidiary shipping companies by 1953. The service from Waterford to Fishguard ceased.

The dreaded Princess Maud, the relief ship for LMS, had a round bottom which caused it to rock on the gentles seas. In the 1950s Dublin wags called it “rock and roll.” 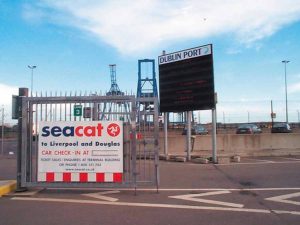 How trade on the  Irish sea transformed shipping history

The story ofIirish sea traffic for the past thirty years has been of car ferries and freight trucks. The 1960s first saw people started to take cars across the sea. Until 1966 they were lifted on and off the ship by crane,  put on railway cars and then lifted off in Rosslare.

Side-loading was introduced for the first time on the St David by British Rail, who were renamed Sealink in 1969. It was a modest beginning of 160 cars per load. Soon afterwards the first custom built roll on roll off car ferries were purchased by B&I, government owned since a buyout in 1963. In 1976 the St Columba arrived to revolutionise the route. The cattle were pushed off passenger ferries and lounge seats were fitted out for the ten hour journey to Liverpool (Dun Laoghaire was three and a half hours by contrast).  The economics of Liverpool meant that B&I stopped serving the route, concentrating instead on Dublin-Holyhead and a new Rosslare-Pembroke route. B&I Line was sold to Irish Continental Group in 1991 and the Isle of Innisfree replaced the Munster on B&I Line_s Rosslare – Pembroke route.

By then the Irish Sea had become a battleground between the two major operators on the route. Both brought the latest technology to help ply their trade across an increasingly narrow pond.

In Dun Laoghaire and Holyhead nearly Eu90 million was invested in new state of the art port facilities.  Both ports acquired new passenger terminals, new access roads and large parking areas – all designed to speed-up check-in and loading and unloading& for motorists, lorry drivers and foot passengers.  Check-in times for motorists and foot passengers were cut to 30 minutes. The new high speed ferries could do two runs in the time it used to take to unload. The local authorities in Wales did their bit, reconstructing the A55 to ensure the entire lower deck of the superferry didn’t get stuck behind a tractor.

Sealink, purchased by Swedish firm Stena in 1991and soon renamed Stena, used its first high speed ship on the Irish Sea in 1993. It was joined by the HSS in 1995, which had a Mary Shelley launch party when it was icebound in the Swedish resort town of Lysekil, north of Gotenborg.  It was clear that Stena regarded the Irish Sea as their most important and most competitive route.

Irish ferries meanwhile introduced the Isle of Innisfree on the Dublin – Holyhead route and the renamed Leinster, now Isle of Innismore, transferred to Rosslare – Pembroke. 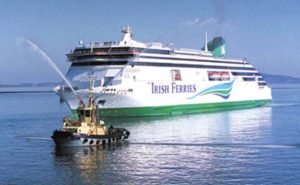 While Stena’s ships got faster, Irish Ferries ships got bigger. In 1996 the Isle of Innisfree was launched in Rotterdam and entered service on the Dublin-Holyhead route, followed by the even bigger Isle of Inishmore in 1997. In 1999 Irish ferries introduced their high speed ferry named for Jonathan Swift and in 2001 the Ulysses, the world’s largest car ferry.

New competitors were arriving by the day. An Irish Continental Line subsidiary, Belfast Car Ferries, was established to operate a daily return car ferry service between Belfast and Liverpool between 1982 and 1990.

The P&O group, concentrated on the continent, bought Larne port and started a new service to Cairnryan. They were to repeat the strategy in Dublin, by opening a Mostyn route for freight.

And the businessman who purchased Sealink when it was sold off by Margaret Thatcher to one of her political cohorts, sold the shipping line on to Stena in 1991 and set up Sea Containers. They were restricted to non-Stena routes, but having found Dublin through their purchase of the Isle of Man Steam Packet company, began a Liverpool high speed service.

Nowadays there are more sailings out of Dublin in a day than there were from the entire island of Ireland when that cut price airline first flew overhead.

The first great battle in the era of high speed shipping was fought here. And unlike those old cannon-and-shrapnel encounters, everyone one. Most of all the consumer.