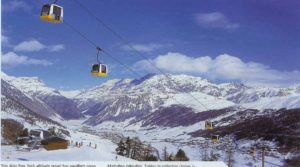 “I left my liver in Livigno”. It sounds like a bad taste country ‘n western number.

In fact, it’s what you hear a lot of first-time Irish skiers saying on their return from a wild week in the friendly, duty-free Italian ski resort. Throw a few lines in about the ski reps’ sex lives and you have a tune of tragi-comic proportions.

It’s easy to write Livigno off as a cheap ‘n cheerful option for beginners and intermediates. Skiers who’ve visited the resort have criticised the five hour bus transfer from Bergamo and the fact that the resort stretches out in an eight km line. On the mountain, holidaymakers complain about tiresome links from the Mottolino area to the Costaccia or Carosello ski areas.

But on a January visit, I was pleasantly surprised – not just by an alpine charm that equals or even outstrips pricier, supposedly more cosmopolitan European resorts – but by the height of the resort (3000 metres at the top of the mountain) which ensures the coldest nights you‘ll ever experience, a long season and a fair guarantee of good snow.

Advanced skiers won’t find any long, black mogul fields to challenge them here but perhaps the challenge of Livigno lies more in the bars. Beginners and intermediates will love the wide open bowls and cruising runs that work wonders for the skiing ego and it’s also possible to ski in St Moritz for a day on your lift pass.

Once cut off for seven months of the year due to heavy snowfalls, Livigno was granted tax exemptions in the 16th century to boost economic relations with neighbouring villages. Subsequent tax privileges were granted by Napoleon, the Austrians and most recently by the Italian Republic, which in 1973 established the free-trade area.

This duty-free status draws European visitors throughout the year. Another plus in Livigno is the quality of three star hotels and the impressive size of apartments compared to French resorts.

A word of warning; the authorities do reportedly run checks at the ‘border’ to ensure that you’re not taking the resort’s entire supply of rum home in your suitcase.

While supermarket booze is obscenely cheap, prices elsewhere are mixed. You can pay as little as €11 for a round of five drinks during a resort pub crawl and just over €3 for a litre of beer during happy hour at Galli’s pub or €5 for a short and mixer in Kokodi’s nightclub. But a lukewarm cup of tea could set you back €2.50.

Similar to other Italian resorts, nightclubs have the bizarre practise of selling drink cards, which you buy in advance and use up as the night wears on. At Kokodis, all drinks are €5, whether you buy a bottle of water or a double bacardi and coke. Guess what: you end up drinking a hell of a lot of bacardi and coke. In the pub grub stakes, a basic pizza will set you back just €5.80 but you could pay as much as €10 for a very average breakfast. At the upper end of the market, a gourmet meal at Bivio’s will cost around €40 per person and up to €30 a head at the excellent Mario’s pizzeria.

In the shops, expect to find prices about 20pc cheaper than other resorts. But while you’ll find some good deals on intermediate skis, don’t expect big bargains on advanced models.

On and off the mountain, Livigno epitomises the hilarious fun of first ski holidays. If you’ve ever wondered what frozen vomit looks like, you have a moderate chance of finding out here. But while the resort is lively and atmospheric, it’s not rowdy or rough. Equally important, it hasn’t lost its soul to complacent, tired tourism but retains a friendliness and attention to personable service. Ski reps are the friendliest and most helpful that you’ll ever come across.

As with other Italian resorts, apres ski is not a strong point and needs to be more developed to suit Irish tastes. Hanging from the rafters drinking schnapps at 4pm a la Bad Gastein or St Anton in Austria isn’t as common here.

On the other hand, that could be a good thing, leaving you free to try hilarious pursuits like bum-boarding (racing down the nursery slopes on plastic trays) skidooing or the latest sport of snow-rafting, which is due to start up in Livigno this season.

Once night falls and dinner is out of the way, bars like Hotel Bivio’s Kuhstall, Daphnes, the Roxy and Galli’s come alive. Musicians Walter and Paco, who play nightly at Bivio’s, are one of the best ski resort acts I’ve ever come across while Rob, who runs the bar, knows how to make revellers feel welcome.

If there’s one thing Livigno should do, it’s to pedestrianise more of the central resort area or make it completely car free. As well as dealing with lethally icy roads and awkward equipment, skiers have to contend with a lot of traffic on the way back to their hotels or apartments in the evening.

*Livigno is 1800 metres high at resort level, 3000 metres at the highest point of the mountain

*It has 100 km of piste and a total of 63 runs, most suited to beginners and intermediates.

*In 1952, Livigno had just two hotels. Today, it has almost 9,000 tourist beds and is currently bidding to host the 2005 mountain bike world championships.

*The resort’s height and its dry, cold weather lead to average winter temperatures of -10. While we were there, the temperature plummeted to -25 degrees.

*A free bus service runs in the resort from 7am to 8pm every day. Because the town is spread out, it’s common to take taxis at night. All resort drivers charge a minimum fee of €6, not as cheap as we expected.

*Catherine Murphy travelled to Livigno with  Directski.com, who allow you to book, pay for and customise holidays on the internet. She stayed at the three star Europa hotel, a ten minute walk from the resort centre.